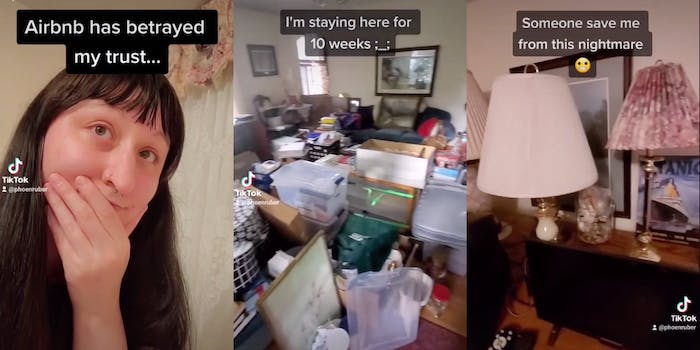 ‘Someone save me from this nightmare’: TikToker reveals 5-star Airbnb listing is actually ‘hoarder’s house’

She was scheduled to stay for 10 weeks.

Airbnb has “betrayed” one TikToker’s trust after the listing she booked turned out to be a “hoarder’s house.”

The TikToker, who goes by Phoenicopterus Ruber or @phoenruber on the platform, shared pictures of a bed and breakfast that was supposedly listed on the Airbnb website and then compared them to what she actually found. The TikTok has received over 134,000 views.

Although she admittedly thought the pictures of the listing looked “sparse,” Ruber was reassured by the five-star rating and reviews. Her previous experiences with Airbnb were fine, she shared in a comment, so she trusted the listing. She also stated that there weren’t many affordable options in the area she was visiting near Edinboro, Pennsylvania.

Once she arrived, she was shocked at what she found.

“Someone save me from this nightmare,” she said.

The living area appeared completely filled and overrun with random items, boxes, and extra furniture, and the air conditioning and shower were both broken, according to Ruber. She was scheduled to stay for ten weeks.

It’s unclear if the house can be labeled as a hoarding situation, but there seemed to be signs that could match the description.

Hoarding is a disorder that causes persistent difficulty in discarding or parting with possessions, regardless of their actual value, according to the Anxiety & Depression Association of America. The behavior usually has deleterious effects—emotional, physical, social, financial, and even legal—for both the hoarder and their family members.

Viewers thought it was definitely hoarding.

“On today’s episode of hoarders,” one user commented, referencing the reality TV show Hoarders that documents what having the disorder is like.

In addition to the possible hoarding, Ruber said she works night shifts as a nurse, and the owner of the location kept latching the screen door at night. She’s had to call them to let her in because they didn’t give her a key.

TikTok viewers said 10 weeks was far too long to stay in such a place.

“I watched a weird movie once about a couple that buried their guests in the walls, and honestly this has similar vibes. Time to go!” one user commented.

Others were eager to hear what Airbnb had to say for themselves.

One person said, “What did Airbnb say? You can’t blast them if you’ve not let them know & ask for a different host!”

In a video response to the comment, Ruber admitted that she wasn’t even going to ask for a refund or change.

“I was just going to suck it up and live with it,” she said.

Once her original TikTok about the experience gained so much attention, she realized she needed to stand up for herself.

In a follow up TikTok, Ruber revealed that she “escaped from the hoarder’s house,” and apparently moved to a hotel, complete with a working shower.

She captioned the video, “I can’t thank you guys enough for pushing me to stand up for myself.”

Viewers were happy to see her in a new place but wanted to know what happened with the Airbnb and its owner.

Ruber said she “hightailed it out of there” and fortunately didn’t have to explain herself to the owner.

As for the company Airbnb itself, Ruber said in follow-up videos that she still has not received a refund or even much communication, despite her numerous attempts to communicate with the company.

Neither Airbnb nor Ruber immediately responded to the Daily Dot’s request for comment.