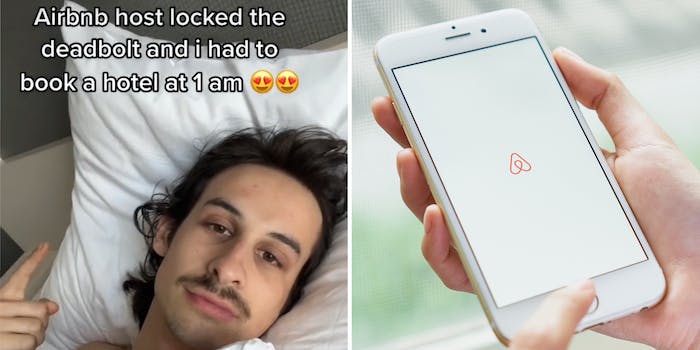 ‘Airbnb is so sketchy’: Man claims his Airbnb host locked him out in the middle of the night (updated)

'This happened to me once.'

In a viral TikTok, a user on the video-sharing platform says he was locked out of his Airbnb by his host and had to book a hotel room late at night.

Andrew Clark (@stringbeanboy13) posted the clip of himself in a hotel bed on Monday. The text overlay reads, “Airbnb host locked the deadbolt and i had to book a hotel at 1 am.”

Commenters told Clark to report the incident to Airbnb to get a refund.

Some viewers shared their own similar experiences. “This happened to me once and airbnb comped the hotel stay that night > we ensured they comped at least 50% of the rest of the trip.”

Others wrote how Airbnb is “so sketchy like this.”

According to Airbnb’s website, “if something goes wrong during your stay,” the first step to take is to message your host.

After that, you can send a refund request as well as gather and submit evidence to the Airbnb team, within 72 hours. Travel issues that are covered by the Rebooking and Refund Policy include the host failing “to provide access to accommodations.”

The Daily Dot has reached out to Clark and Airbnb for comment via email.

Update 4:54 pm CT, May 19: Andrew Clark connected with The Daily Dot to share more details on getting locked out of his Airbnb accommodations.

“The Airbnb was in Berlin, Germany. The host was an American (about 70% sure of this) living in a large 3 bedroom apartment. She was renting out two of the rooms of which I occupied one. She seemed polite and had a lot of strict rules regarding wearing shoes, having guests over (not permitted) and Covid guidelines. I was happy to honor these rules as I thought it indicated she would be a quite attentive host. I was incorrect — she was extremely negligent.”

He continues, “I was given two keys, one for the building and one for the apartment. On my 5th night at the apartment I returned home just before midnight. My phone was getting low on battery and I was exhausted. I spent a lot of time out that weekend and was looking forward to getting some rest in on that Sunday night.”

“As I made my way up the steps and put my key in the door. I turned and pushed in only to be met with force. The door would not open. I quickly realized the additional deadbolt had been locked. This was not the first time this had happened.” He tells The Daily Dot he was locked out twice more on his trip.

He stresses that he did his best to contact the host, via the Airbnb app, by phone, and by knocking, but was met with no response. “I tried to contact the phone number I was given but it didn’t work. I messaged Airbnb support explaining the situation and that I felt quite unsafe not knowing where I was supposed to go.”

Thanks to his brother finding a direct customer service number, Clark was able to contact support. “I was able to get in touch with an AirBnB rep fairly quickly and they asked about the situation which I explained in detail. They tried contacting the host with no luck. I was told to book a night in a hotel and that I would be reimbursed. I also sent them a video of me trying to open the door with a key.”

Clark continues, “The next morning I did not hear from the host until 11 am. She offered a measly apology and I was able to get back inside and finally shower and change my clothes. I tried to avoid her the rest of the trip as I felt quite uncomfortable around her. She did reach out to me later that day, to let me know to be more gentle when closing the front door. I thought that took a lot of nerve after she locked me out overnight.”

He also alleges that Airbnb hasn’t been much help. “I’ve been trying for almost a full week to resolve this issue with AirBnB with little to no success. I’ve opened a case to look into this but I really haven’t gotten any tangible response. Nothing more than the “we’re looking into it”. I’m extremely frustrated at this point. If this doesn’t work out I’m likely to never stay in an AirBnB again.”

He continues, “I’ve spoken on the phone with countless reps and waited on hold for at least an hour or two total. No one seems to be giving me the time of day. I like to solo travel and normally I feel safe and in control. This moment was a big departure from that as I was really worried what would happen to me. My phone was about to die, and I had to wander the streets alone at night without knowing the local tongue. I’m quite privileged that I’m a physically imposing guy, I can only imagine if it was someone else in my shoes. I really just want this situation behind me at this point.”