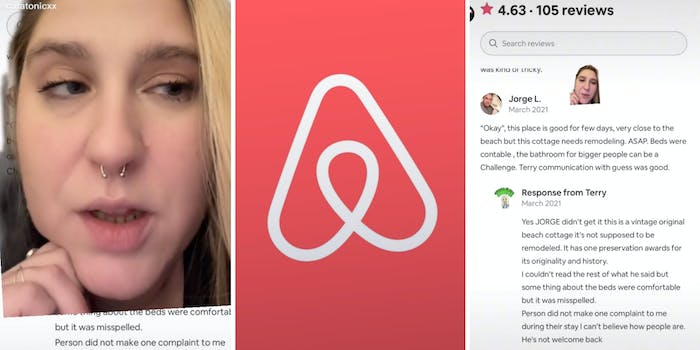 ‘I found the most unhinged woman on Airbnb ever’: Viral TikTok shows host’s ‘unhinged’ responses to guest reviews

‘The reviews aren't even being mean and she so outta pocket.’

Last week, an Airbnb host got roasted in a viral TikTok for her “unhinged” replies to bad reviews left by guests.

The TikTok posted last week by user @catatonicxx, which has over 74,600 views, shows the user reacting to reviews for “Terry,” an Airbnb host who has a habit of reacting negatively to guests who criticize her.

“Hi, her name is Terry and she’s a Terry-ble Airbnb host,” the user said in the video.

Airbnb is an online marketplace where hosts can rent out their properties to people traveling or on vacation. Guests who stay in the rentals can then leave public reviews based on how their stay went.

A communications associate with Airbnb told the Daily Dot via email: “Here is our Review Policy, which allows Hosts to reply to reviews as long as they do not violate our Content Policy.”

The complaints from Terry’s Airbnb guests shown in the TikTok were mild. A couple of reviewers complained that the place they stayed in could use some remodeling, and another said that the place was a bit small.

But each Airbnb review was met with a long, angry response from Terry accusing guests of being dirty and even “weird.”

One review of Terry’s Airbnb rental states: “This cute cottage was a nice get away. The beach down the access way also was wonderful. The inside especially the furniture could use an update for comfort. The whole cottage could use a bit of sprucing up. That said we couldn’t beat the cost and we were happy with our stay.”

Despite the review being mostly positive, Terry replied: “This guest wouldn’t know anything about sprucing any home up! They left my sweet vintage clean cottage so dirty it was ridiculous.”

The user @catatonicxx has blasted Terry in multiple videos for her Airbnb replies.

“I found the most unhinged woman on Airbnb ever,” the user said in another TikTok posted two months ago.

In that TikTok, the user reveals more examples of how seemingly out of proportion some of Terry’s responses are to reviews that criticize her.

Users in the comments section were shocked by Terry’s responses.

“Terry giving reviews back oh my gosh,” one user commented.

“She’s in denial,” another said.

Some users criticized Terry for not being able to handle feedback.

“The reviews aren’t even being mean and she so outta pocket,” a user replied.

“Terry cannot take ONE OUNCE of constructive criticism,” another commented.

A few wanted to see more of Terry’s drama.

“I looove this kind of tea. it’s the best,” one user said.

The Daily Dot reached out to user @cataonicxx in the comments section of their viral TikTok, and to Terry via Airbnb message.