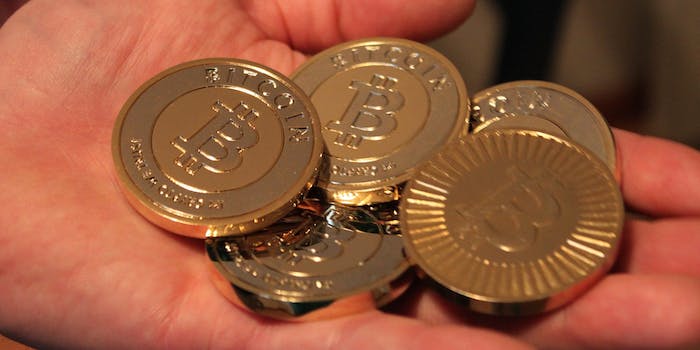 It all started with a copy-and-paste error.

A Bitcoin user, who inexplicably threw $500,000 worth of the digital currency into the abyss last month, has managed to recover his funds.

The story starts in early June, when Reddit user TheDJFC posted about how he “messed up big time.” Explaining the blunder as a copy-and-paste error, he mistakenly sent 800 bitcoins—worth about $500,000—to the wrong digital wallet.

The Bitcoin community on Reddit verified TheDJFC’s story and helped him determine that the address where he sent the Bitcoin belonged to Mt. Gox. It’s not clear whether or not the Mt. Gox address was one that TheDJFC once controlled, but it was quite clear that the bitcoins were stuck there.

Though it was once the largest Bitcoin exchange in the world and something of a symbol of Bitcoin’s rise, Mt. Gox crashed in spectacular fashion in February, losing hundreds of millions of dollars worth of its customers’ bitcoins in the process.

On Bitcoin discussion boards, those who lost money in the crash are said to have been “goxxed,” a play on another popular term for something bad happening: “doxxed,” which means to reveal an anonymous online person’s identity by finding and posting personal details on the Internet.

But alas, we all make mistakes, and no one deserves to lose half a million due to a copy-and-paste error. It was with this spirit that the Bitcoin community on Reddit advised TheDJFC to hire a lawyer to reach out to the bankruptcy trustee that’s now in charge of Mt. Gox.

After taking those steps, TheDJFC was able to recover the bitcoins, according to a comment he posted on a Reddit thread started Friday, titled “Remember the 800 BTC fuckup guy?” TheDJFC has not responded to our request for more details on the process.

The person who started Friday’s thread, Reddit user 1ruru, did so after noticing that the 800 bitcoins had moved from the Mt. Gox address earlier this week. At first it was unclear whether or not the bitcoins had been recovered, but TheDJFC’s eventual comments on the thread provided clarification.

To his credit, TheDJFC seemed to keep his composure throughout the ordeal and even managed to laugh at himself when it was all over.

“From now on, I dub thee.. ‘The Ungoxxed man,’” 1ruru wrote to TheDJFC in Friday’s thread. His reply: “I will wear that badge with pride.”