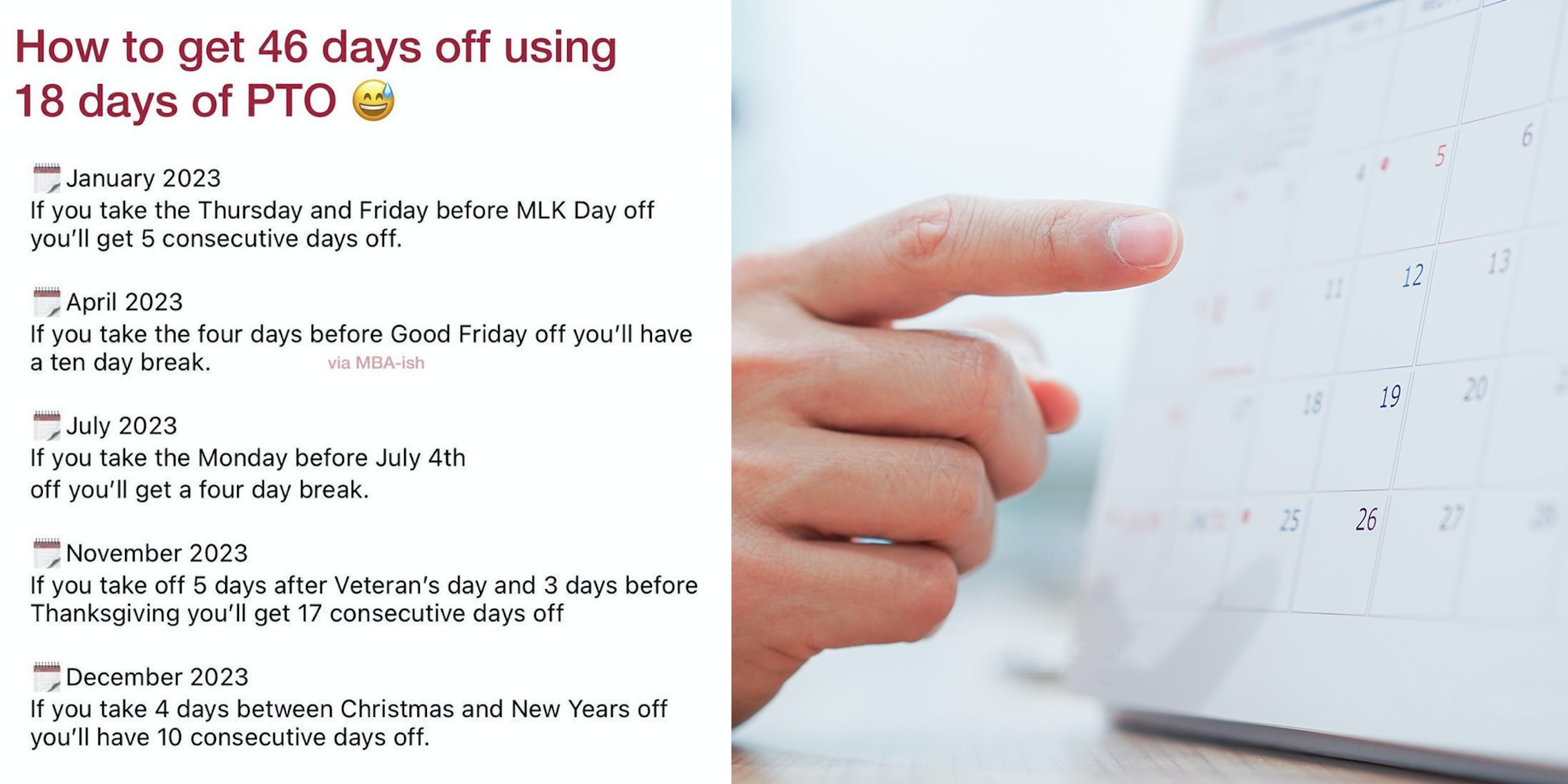 ‘Do people not do this? I do this for every holiday’: TikToker shares hack to getting 46 days off using 18 days of PTO

Recently, a hack showing how to get 46 days off using 18 days of paid time off (PTO) started circulating around Facebook. Now, the hack is again going viral after being shared to TikTok by user @fandomfanboi.

The TikTok from @fandomfanboi currently has over 9.3 million views.

In the comments section, some users immediately appreciated the advice.

“Do people not do this,” questioned one user. “I do this for every holiday lol.”

“Thank you,” another stated simply.

However, many noted that this tip did not apply to their workplace.

First, many Americans simply do not get 18 days of PTO. In fact, according to the U.S. Department of Labor Statistics, the plurality of private industry U.S. workers at a company for over one year only get 10 to 14 days of PTO.

“After 10 years of service, 33 percent of private industry workers received between 15 and 19 days of paid vacation,” the U.S. Department of Labor Statistics adds.

Additionally, many people don’t get PTO at all. There are no federal laws guaranteeing PTO, and only a few states promise it to its workers.

Many TikTokers claimed they were part of this group with little or no PTO, or in companies that did not give PTO during the listed holidays.

“When your company doesn’t give any of these holidays off,” stated a commenter.

Additionally, even if users had PTO available, many commenters claimed that their companies had methods in place to prevent employees from engaging in schemes like this, or from using their PTO around the holidays altogether.

“As if they would approve the PTO,” noted a user.

“A lot of businesses don’t allow their employees to take PTO a day before or after holidays. So this ‘plan’ fails,” explained a further TikToker.

Still, some were excited by the idea of taking off work for long stretches of time.

As one user wrote, “I would do this all the time. Make sure to schedule your PTO in advance!!”

We’ve reached out to @fandomfanboi via email.