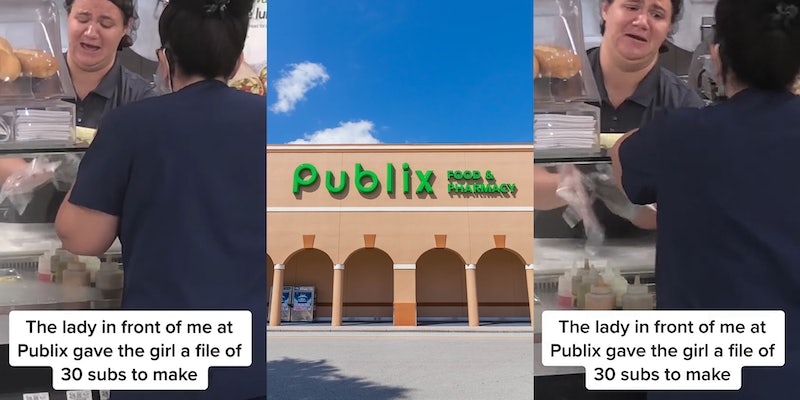 ‘If you have to place your orders into an excel spread sheet, go to Subway’: Customer gives Publix employee ‘a file of 30 subs to make,’ sparking debate

'They should deny these orders and require 24 hour notice.'

A video showing a woman allegedly requesting 30 submarine sandwiches from a local Publix location has gone viral after being shared on TikTok.

In the video posted by user Drew (@dfulmss), a woman places a list of sandwiches on the counter. The person behind the counter appears distressed, but still seems to begin making the sandwiches.

“If you have to place your orders into an excel spread sheet, go to Subway,” writes Drew in the caption.

@dfulmss If you have to place your orders into an excel spread sheet, go to Subway 😂 #Publix #fyp #foryou #foryoupage ♬ Oh No – Kreepa

In the comments section, Drew notes that “In this girl’s defense, she told her she would be back for them. But dang, I still couldn’t believe it lol.”

Other users in the comments said that simply ordering and returning later to pick it up is not enough; rather, the woman should have opted to place an order ahead of time to both give the location enough time to prepare and allow them to balance the large order with orders from other customers.

“Why inconvenience yourself by calling ahead a few days when you can just show up at noon and inconvenience everyone?!” asked one user.

“They should deny these orders and require 24 hour notice,” shared another.

“That’s a catering order. Should [have] told her to call ahead,” offered a third.

Some users claimed to have experience either working at or frequently visiting Publix. These users allege that their Publix location would have refused the order.

“So I’ve worked for Publix Deli and anything more than four Subs at one time is considered a platter so yes she could say no,” stated a commenter.

“My Publix would tell them no, need to put it in as a catering order or order it online ahead of time,” agreed a second.

“We refuse anything over 4,” a further user wrote.

The Daily Dot reached out to Drew via Facebook message and Publix via email.