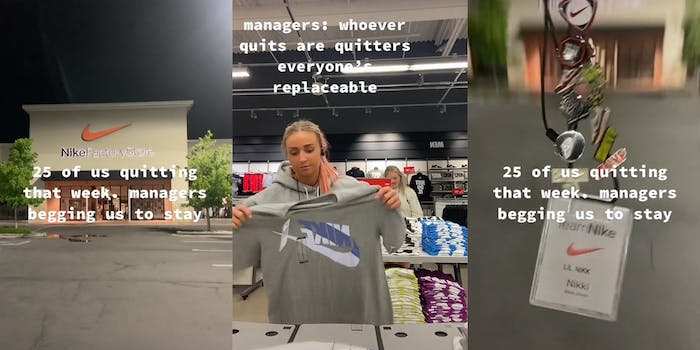 ‘THE DISCOUNT IS NOT WORTH THE EMOTIONAL DAMAGE’: 25 Nike employees allegedly quit after manager says they’re replaceable

The TikToker says management begged them to stay.

A TikToker went viral this week after claiming her Utah-based Nike Factory Store managers told her and the rest of the staff they were replaceable. In response, user Nikki (@nikkidavis020) says she quit along with 24 other co-workers, resulting in management begging them to stay.

It’s unclear what led Nikki and fellow co-workers to quit besides management issues, though her previous TikToks may give some indication of what working at the Nike Factory Store was like. In her other TikToks, she complains of dealing with “Karens” and other customers with ridiculous inquiries.

However, it seems from her original TikTok that management was a motivating issue in getting her and other employees to leave.

As CNBC reported in March of this year, 44% of workers are currently in search of another job. Compounding this are the record amount of people quitting their present employment. CNBC reported, “Nearly 4.3 million people quit their jobs in January, just shy of a monthly record set in November.” The total number of people who quit their jobs last year was also an annual record, coming in at almost 48 million people.

In the comments under Nikki’s video, users were not surprised by her decision to quit given both their alleged experiences in Nike stores and the current labor market.

“Nike Outlets stores are the worse places to work for,” one commenter shared. “THE DISCOUNT IS NOT WORTH THE EMOTIONAL DAMAGE.”

“Best decision you’ll ever make,” another added. “As former Nike employee the long hours esp closing shifts not worth the discount.”

“I remember being told that too while working for Nike as a manager,” a third alleged. “Company doesn’t care about retail employees.”

“Nike outlet is the worst job I ever had In my life,” a fourth claimed. “I made it like a month.”

Others noted the stupidity of the management’s original statement, explaining how that ideation leads to people quitting jobs.

“If you have to beg for employees to stay, you ain’t an effective manager,” another agreed.

The Daily Dot reached out to Nikki via TikTok comment and Instagram direct message and to Nike via email.