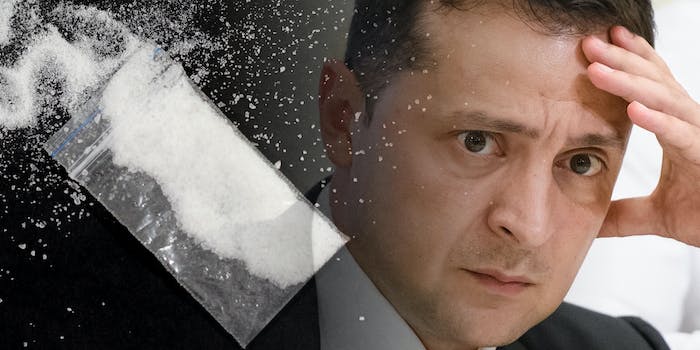 Pro-Russia accounts are spreading a fake video across social media.

A video circulating online purports to show a white powder on the desk of Ukrainian President Volodymyr Zelenskyy during a conference call with Tesla CEO Elon Musk. But the video, shared widely by pro-Russia accounts, is nothing more than disinformation.

The footage went viral on Monday after being posted to TikTok, where users viewed the video more than 750,000 times. The short clip, which looks to be a screengrab from Facebook, is now being cited by many as proof that Zelenskyy was in possession of cocaine.

Users in the comments appeared convinced that the footage was real and used the opportunity to criticize the Ukrainian president.

“No no no this is wrong and dangerous for someone who is leading a country during war and life of millions connected with his decisions,” one user wrote in broken English.

The video was also present on Facebook, where users referenced QAnon-adjacent conspiracy theories in their condemnation of Zelenskyy.

“If not Adrenechrone, then Cocaine is the choice of ALL warped, sexually perverted degenerates, Zelensky is like most Europeans, and especially Eastern European flotsam,” one user wrote.

Despite the assuredness of those online, the video has undeniably been manipulated.

The footage was originally posted to Zelenskyy’s verified Instagram account all the way back on March 5. No such powder is present in the original, high-definition video.

The video of Zelensky’s meeting with Musk was also widely covered by numerous media outlets at the time.

Elliot Higgins, founder and director of the investigative journalism group Bellingcat, also showed a side-by-side comparison of the two videos in a post on Twitter that garnered over 1.6 million views.

The incident is far from the first time that Zelenskyy has been targeted with altered footage since Russia’s invasion of Ukraine.

Just last month a poorly made deepfake of Zelensky calling on his soldiers to lay down their weapons also spread online.