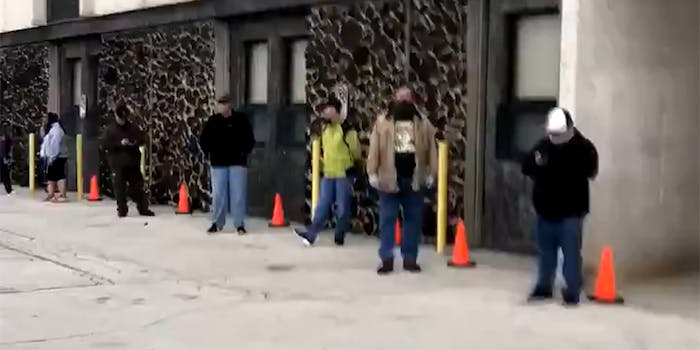 The voting is going forward.

On Monday night, Wisconsin Gov. Tony Evers (D) made the decision to delay his state’s primary, which was slated for Tuesday, due to the coronavirus pandemic.

But the decision—made after Florida decided to go through with its primary last month and poll workers tested positive for COVID-19—didn’t last.

The Wisconsin Supreme Court overruled Evers’ decision after the Republican-controlled legislature challenged it and said the election must go forward on Tuesday.

Later, the U.S. Supreme Court blocked a ruling that extended the deadline for absentee ballots, which would have allowed voters to stay home.

So on Tuesday, Wisconsin voters—in a state with 2,400 confirmed coronavirus cases and untold more undiagnosed—headed to vote.

For some, it was an inspiring sight: people willing to participate in democracy in the face of an epidemic.

But for a great many others, it was an easily preventable calamity pushed forth by a few people who stand to gain a great deal and would consider the risk of the citizenry as necessary.

Critics were also appalled by what they saw as an inhumane ruling from the U.S. Supreme Court, where conservative justices sided with Wisconsin Republicans.

A state Supreme Court seat is up with a liberal judge, Jill Karofsky, polling behind the incumbent, Daniel Kelly.

Meanwhile, in the Democratic primary, Joe Biden has been looking to wrap up his nomination sooner rather than later and would prefer a state like Wisconsin, where he is polling well, to get him a much-needed bounce at a time like this.