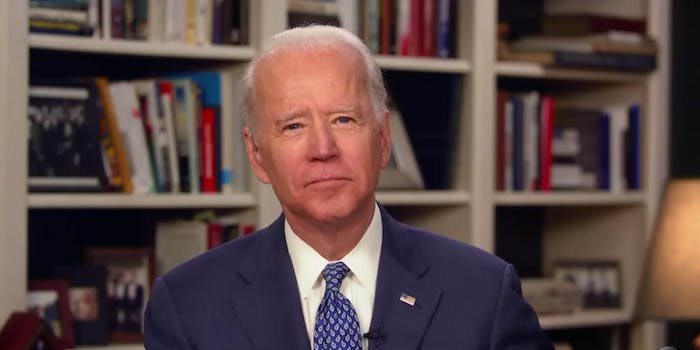 Biden: ‘Virtual’ Democratic National Convention needs to be on the table

Former Vice President Joe Biden argued on Sunday that the Democratic National Committee (DNC) must be willing to hold a “virtual” convention if the coronavirus pandemic continues into August.

Speaking on ABC’s This Week with George Stephanopoulos, the presidential contender weighed in on the DNC’s recent decision to push back the nomination process from mid-July to Aug. 17.

“We’re going to have to do a convention―may have to be a virtual convention,” Biden said. “I think we should be thinking about that right now.”

Biden stated that it may not be possible “to put 10, 20, 30,000 people in one place” if the highly-contagious virus is still spreading, but that technology could still enable the process to take place.

“What we do between now and then is going to dictate a lot of that as well,” Biden said. “We have never, never let our democracy [play] second fiddle… We can both have a democracy and elections and at the same time correct the public health.”

Speaking to the numerous states that have postponed their primaries due to the disease, Biden also added that state officials should place public health above politics and “follow the science.”

But DNC Chair Tom Perez has been vocal in his opposition to a virtual Democratic convention. Perez recently bemoaned the fact that such an event would undoubtedly produce less media coverage than an in-person convention.

“We’re going to hold a very exciting and safe convention in Wisconsin to highlight our nominee and to make sure that people know the values of the Democratic Party and what we’re fighting for,” Perez said.

Biden, the current Democratic frontrunner, is still vying for the nomination against Sen. Bernie Sanders (I-Vt.). Both candidates continue to address their supporters remotely from their homes amid the global pandemic.