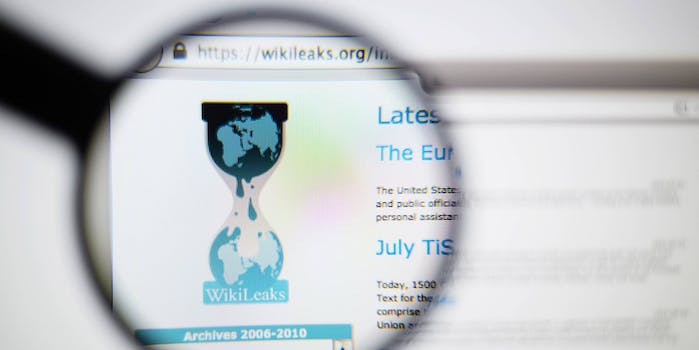 News of the Wikileaks DNC email dump has dominated political coverage since its release on Friday. To skeptical Twitter users, that news hasn’t reached quite far enough.

According to Wikileaks, the social media company is suppressing news about the release of nearly 20,000 emails. Wikileaks tweeted to its supporters on Saturday morning requesting that they similarly tweet about the emails to that theory.

Some have complained about tweets containing DNC leak links not sending or that they have been blocked from tweeting. The Daily Dot has reached out to Twitter regarding this matter and is awaiting a response. The social media company issued a tweet denying the aforementioned allegations.

Re: #DNCLeaks: These links haven't been and are not currently blocked. Anyone saying otherwise is uninformed. https://t.co/XjQgwsCu6j

This isn’t the first time that Twitter has been accused of skewing its services and allegedly suppressing news. A group of anti-Clinton users called out the company in Feb. after it appeared as if the hashtag #WhichHillary had been erroneously dropped from the site’s trending tab.

Regarding that accusation, a Twitter spokesperson chalked it up to the hashtag simply not being as popular as users had imagined.

“As elections approach in countries around the world we hear conspiracy theories about political trend manipulation, from activists on the left, the center, and right. But the actual reason a topic doesn’t trend is because its popularity isn’t as widespread as supporters believe,” the spokesperson told the Huffington Post.

It’s unclear what could be causing users to experience issues with tweeting about the DNC emails. The issue may be an error in the site’s auto-detection of spam or automated tweets.

As of this writing, #DNCleaks was the No. 2 trending topic in the United States.

Update 6:26pm CT, July 23: This article has been updated to include Twitter’s response.