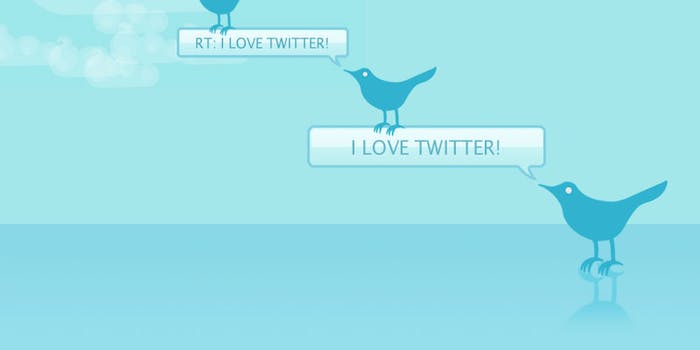 Retweets have morphed into much more than just “here’s what I like”—which is a good thing for users and for Twitter.

Retweeting is like a using a tiny, powerful printing press.

Retweets, or the sharing of other people’s tweets on Twitter, have made Twitter’s use vastly more complex than when the network was founded. When you share someone else’s tweet, you’re doing much more than hitting a button. You’re participating in the building of public knowledge necessary within your own social network.

Retweets are a big part of Twitter the way sharing is a part of Facebook. In the beginning, though, even Twitter did not seem to understand how retweets were important.

Retweets were straightforwardly introduced in 2009 to serve a single purpose: enable sharing of “particularly” interesting tweets. Today, there is more than one reason and way to retweet, and the very way Twitter launched the retweet was to offer a way for users to share the best-quality information:

Retweets have morphed into much more than just “here’s what I like”—which is a good thing for users and for Twitter.

In the first part of my analysis of the importance of seeing social sharing in a historic context, I reviewed how online sharing tools are an underestimated act that satisfies an insatiable human need to share information better and faster. Modern communication networks must offer tools for sharing the same way Gutenberg’s printing press started first with texts approved by governments and religions, but later gave way to sharing all kinds of printed texts and materials.

Social sharing isn’t just our modern way of printing books: it’s also a popular but controversial way to measure the value of information itself. You can read my thoughts on the difference between social sharing and raising awareness here.

With this in mind, let’s dive into one social network, Twitter, to see how some information professionals use it. Note: these are not intended to be official statements of any employer or organization, but rather a collection of personal thoughts from those quoted. These reasons are not mutually exclusive by any means, and some people will usually retweet only if a tweet is a combination of reasons.

We will begin with a general word of advice from Elana Zak at the Wall Street Journal:

“Take retweets as seriously as you take writing your own tweets. Make sure the links work and that the content adds value to both your feed and followers.”

Retweeting specific people, such as a celebrity or person you work with or know, is just as important as what the tweet includes in terms of pictures, text, and links. It’s the social aspect of retweeting:

Elana Zak, social media editor, the Wall Street Journal (@elanazak): “If there’s breaking news, we may only retweet reporters and WSJ accounts on that topic.”

Sasha Koren, deputy editor of interactive news, the New York Times (@SashaK): “From @nytimes we retweet other New York Times accounts run by desks (@nytmetro, @nytimesarts, etc) as well as individual journalists, to both augment our handwritten tweets and give followers a picture of the breadth of our coverage and our staff’s activity on Twitter. … What we don’t retweet from New York Times–branded accounts is non-NYT sources or commentary. We do encourage staff to do so on their personal feeds, though.”

Brian Ries, live news editor, Mashable (@moneyries): “I retweet the best tweets sent by our reporters. I retweet the most notable tweets sent by politicians, celebrities, or other brands … sometimes I’ll retweet notable users who are sharing our stuff. All of this is meant to signal-boost.”

Signal-boosting is usually a reference to increasing the number of people who see a tweet, but in this specific sense, it can be applied to either a person’s account or information in the tweet.

A similar sentiment was echoed by Samir Mezrahi, senior editor, BuzzFeed (@samir): “When there is news I retweet to move the convo forward.”

Daniel Victor, social media staff editor, the New York Times (@bydanielvictor): Retweeting is “somewhat of a carrot for our reporters and desks to tweet well, since everyone loves all the attention you get from being RTed by the main account.”

Twitter originally specified this was the primary reason why they introduced the function. Since this falls under the “what is good to tweet?” topic, I spent less time on the well-covered issue. Here are some tips, though:

Zak: “You’ll win points with me if the tweets are well-written and make sense to a reader new to the information. No typos or tons of text-speak. The tweet should either share a piece of information or make me want to click on the link to read more. In terms of what @WSJ retweets, it varies greatly depending on what’s happening, news-wise.”

Victor: “Sometimes the personal way individuals can write is a better on-ramp to the story anyway, like this one sent the night of the Boston Marathon bombings.” Screenshot:

To avoid confusion, news organizations tend to stay away from using the retweet function to laugh at a person or to “troll” someone. However, retweeting for the sake of irony is quite popular among the Weird Twitter and power user set, although it tends to express itself mostly as favorites. An example of when favorites replace retweets (tweet by @abrahamjoseph):

Brand accounts that are not responsible for reporting verified information are much more likely to use the function as long as it fits in with other brand attributes, but this is more for the purposes of customer engagement or marketing.

Before we move on, here’s my all-time favorite example of retweeting for the sake of humor:

Mezrahi noted on his personal Twitter style that he “mostly” retweets jokes, and I personally tend to retweet jokes, too.

4) Retweets to build and engage in an online community

Retweets as a community engagement tool seems to be separated into two aspects: retweets of another user’s account in order to funnel responses to that user or retweets of replies as a function of sharing information (which would broadly fall under 2).

Zak focused on using Twitter to build engagement with readers: “We will supplement RTs without links [from WSJ reporters] by sending out a tweet before or after from @WSJ that will include a link to a live blog or article about what the reporter is live-tweeting. We also do reader call-outs where we retweet reader responses to our query. Those typically don’t include links, since their point is to increase engagement and community.”

Mezrahi, on what types of tweets can be considered for retweeting: “If someone replies to a question I have for others to see their response/the answer to the question.”

4a) Retweets are usually endorsements, which is why news organizations tend to review them carefully on brand accounts.

WSJ, Mashable, the New York Times, Associated Press, as well as my former employer Reuters do not practice retweeting of non-employees who reply with information that is not independently reported on by that organization. However, culturally focused sites such as BuzzFeed are known for a highly engaging Twitter accounts which, from time to time, collect and retweet reader reactions to events and stories, which is not the same thing as using replies to assume verified information is being shared. The matter of verifying social content is tangentially related to the question of retweeting for engagement and signal-boosting.

Which retweet is best?

Before deciding which retweet is best for you, make sure you understand that there are different types of retweet formats as well as reasons for using them, including the RT @manual retweet, the retweet which does not include the “RT” in front of a user handle, and the MT: retweets which are an edited version of a manual retweet, and usually includes additional commentary. Manual retweets have caused their own storm of controversy in recent years since critics have said they break the cycle of sharing information.

“Anyone can do (mostly) whatever they want, and there aren’t really any rules for Twitter. Everyone’s account does its own thing and that is OK.”

What do I recommend, as a power user of the retweet?

First, think about who your followers are and what they want to read. Spend time looking and reading the profiles of your most engaged followers—the people who retweet you and comment on your tweets the most. You’ll learn more about yourself in the process.

Second, you don’t have to take yourself seriously to recognize your influence matters. The time for social media to be recognized as a critical aspect of social communication around the world is past. People have been lost and found on social media networks.

I say, why not use your power to share information for good?

Margarita Noriega is a journalist, an editor at Marketplace.org, and the former social media editor at Reuters. This article originally appeared on margafret.wordpress.com. Republished with permission.