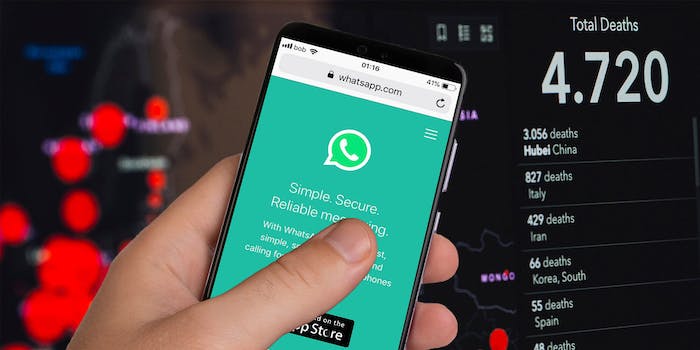 Messages can now only be forward to one contact at a time.

WhatsApp is once again placing limits on message forwarding in an attempt to stop the spread of coronavirus-related misinformation.

The company announced in a blog post on Tuesday that users would only be able to forward a message one time after initially limiting the number to five last year.

The Facebook-owned messaging app noted that it has seen a significant increase in usage as millions around the globe rely on technology to communicate during the coronavirus outbreak.

“We know many users forward helpful information, as well as funny videos, memes, and reflections or prayers they find meaningful,” the blog post said. “In recent weeks, people have also used WhatsApp to organize public moments of support for frontline health workers.”

WhatsApp went on to add that despite the many legitimate uses for messaging forwarding, the feature has also allowed misinformation related to the disease to spread unabated.

“However, we’ve seen a significant increase in the amount of forwarding which users have told us can feel overwhelming and can contribute to the spread of misinformation,” the blog said. “We believe it’s important to slow the spread of these messages down to keep WhatsApp a place for personal conversation.”

The decision was made not long after numerous cell towers in the U.K. were set on fire after a viral conspiracy theory linked 5G communications technology to COVID-19.

While only time will tell what effect WhatsApp’s new policy will have, the company says its previous limiting “led to a 25% decrease in message forwards globally at the time.”

WhatsApp also states that it is “working directly with NGOs and governments” in an effort to provide accurate information to its users.

The new policy appears to be aimed specifically at preventing mass forwarding of messages.

“Last year we introduced users to the concept of messages that have been forwarded many times. These messages are labeled with double arrows to indicate they did not originate from a close contact. In effect, these messages are less personal compared to typical messages sent on WhatsApp. We are now introducing a limit so that these messages can only be forwarded to one chat at a time,” the company wrote in its announcement.

The messaging app is not the first to take action against the spread of misinformation. Numerous social media platforms including Facebook, Instagram, and YouTube have taken similar action to stop the spread of conspiracies.