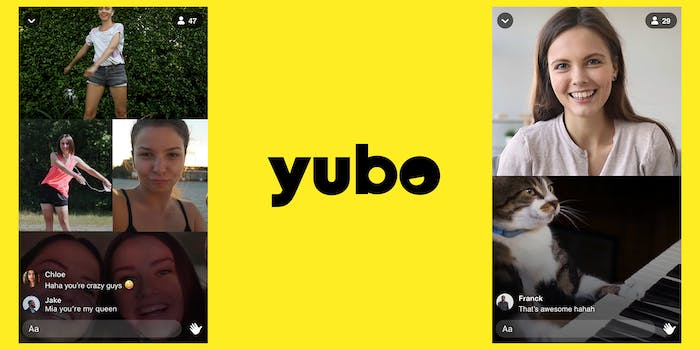 Is Yubo the next big social media app?

The app is gaining popularity.

Your phone is probably full of apps—but Yubo, an app similar to Snapchat, is hoping to make inroads where other apps haven’t.

Yubo, based in France, is a quickly growing social media platform catered for young people with a focus on gaming, photography, and livestreams. It’s been growing quickly—especially during the beginning of the coronavirus pandemic—and looks like new competition to senior social media platforms.

But instead of making money by using user data, the app is taking a queue from gaming: Yubo charges fees for add-ons and other features.

Typically, social platforms have user data at the center of their business model, and use advertising sales to fund the site. But, these data practices are what put Facebook CEO Mark Zuckerberg, Twitter’s Jack Dorsey, and others in front of Congress.

However, Yubo leaves ad and data tracking in the past and puts forth a new platform that is surprisingly not owned any of the tech giants.

Here is what you need to know about Yubo.

Yubo was created by 27-year-old Sacha Lazimi in Paris in 2015. It was once known as “Yellow.” Since then, Yubo has amassed 40 million users.

The company also opened a headquarters in the U.S. in September, setting up shop in Jacksonville, Florida.

The app is a combination of games, chatrooms, and livestreams, all with the idea of creating a community. Users can also take photos of themselves with Snapchat-like filters on the app as well.

Upon opening, users are prompted to join different rooms that vary from location to topic. If a user wants to chat with people in their town they choose the local room. But, users can also choose topics like politics or sports to speak with other interested in the topic. When hosting a livestream, users can also chat with the people hosting it.

“We’re the only social network with this gaming model,” Lazimi told Sifted. “We don’t sell our users’ data, no users come to our platform to make money, and there are no influencers for people to gather around.”

Instead, the apps goals is to connect people regardless of clout. That connection could come in form of game. The app offers games like “would you rather” to play in user rooms.

The similarities that Yubo holds to mobile gaming is likely a reason for its attractiveness to a younger audience. Users starting at age 13 can sign up.

Yubo also spiked in popularity during the early months of the coronavirus pandemic, according to Forbes.

Is the Yubo app safe?

Yubo saves personal data which includes name, age, date of birth, gender, profile image, and password in order to distinguish user profiles. Other information like location is only collected if the user approves.

In its data policy, Yubo also explains how it tracks user activity on the app. For example, the company saves when users log in and how they interact on the app. This tracking allows them to monitor banned behavior like sexual, offensive or racist content.

The site also has a list of safety protocols for users to follow in case of coming across the inevitable.

The app has also been dubbed “Tinder for teens” because of the similarities of swiping when finding new users.

Websites like Common Sense Media, which rates different kinds of media in regards to their relationships with children, have reviews from parents who are concerned about the interactions between teens and older people.

How did Yubo become popular?

As the app now holds around 40 million users, Yubo seemingly appeared out of nowhere. But, investors had the up-and-coming platform on their radar.

Idinvest Partners, Iris Capital, Alven, Sweet Capital, and Gaia Capital Partners all contributed to the $47.5 million raised in a Series C funding round.

Yubo was just recently expanded to the United States as Europe’s first social media platform to rival American companies like Facebook, Twitter, and Snapchat. It’s also pushing into a market that includes TikTok, which is currently owned by a Chinese company.

TikTok went through a similar rise in popularity in the U.S. coming from the outside. Right now, TikTok has 80 million American users in October, according to Wallaroo Media.