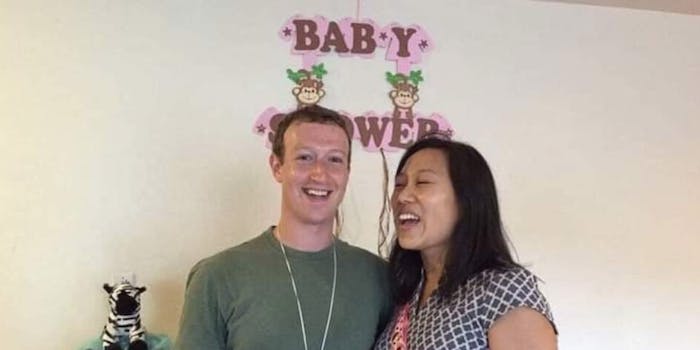 The photos are once again stirring controversy online.

Twitter users are mocking Facebook CEO Mark Zuckerberg after photos showed what was alleged to be his cheap-looking baby shower—but it turns out there’s more to the story.

The pictures, which included Zuckerberg and his wife Priscilla, who have two young daughters together, circulated online and drew many questions regarding the event.

Users began weighing in with their own opinions on the photos, accusing Zuckerberg of attempting to look poor.

“Truly embarrassing to have that much money and still choose to have laminate flooring,” @gabiranner said.

“It’s insulting to the rest of us to have that much money and live like you’re the average American,” @plzbepatient added. “What a disgusting LARP.”

Others joked that the secret to becoming a billionaire was avoiding expensive baby showers.

Many also noted Zuckerberg’s controversial history with Hawaii, where he has purchased large swathes of land against the wishes of the native population.

“He steals land and sells your private information to corporations and the feds but wow it’s so cool how he doesn’t even use his obscene hoard of money for fun things,” @killerguerilla said.

But it turns out that Zuckerberg didn’t throw the party. In fact, there’s no indication that the event was at Zuckerberg’s home either. Even more incredible, the photos are actually from 2015.

Zuckerberg himself revealed online at the time that a group of students he mentored threw the party for him before the birth of his first daughter, Max.

“Students I mentor in the community threw me and Cilla a surprise baby shower!” he said. “So much love and so much fun.”

It appears at least some people online were aware of the fact when commenting, criticizing the original poster for presenting the shower incorrectly.

“This is the baby shower his interns threw him,” @mmmmaybachmusik said. “Why are y’all so obsessed with the ‘billionaires live just like us’ trope?”

Either way, the photos reveal the general disdain for Zuckerberg and Facebook in general given their countless controversies over the years.