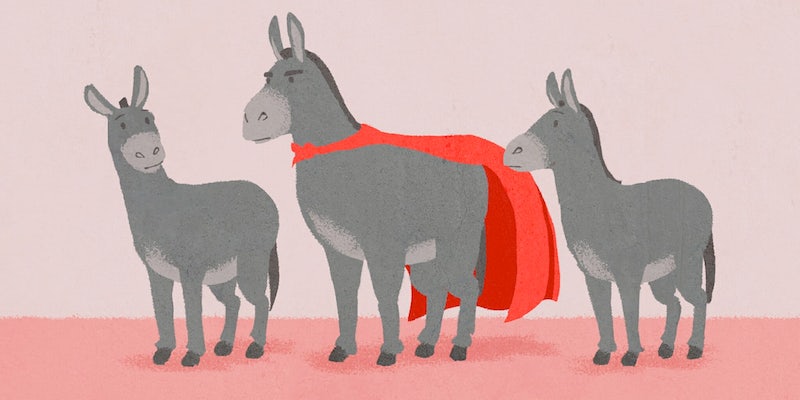 What are superdelegates, and why are they important?

Can a group of 700 party insiders decide who becomes the Democratic presidential nominee?

Is Hillary Clinton on a surefire path to the Democratic nomination for president, or does challenger Sen. Bernie Sanders still have a fighting chance?

Depending on how you adjust the math, the answer may hinge on one thing: superdelegates.

But what exactly are superdelegates? Unlike rank-and-file delegates, superdelegates aren’t tied to the popular vote in their state or district. Superdelegates can vote for whomever they want at the party’s national convention, which this year is in Philadelphia. Even if superdelegates “pledge” or declare allegiance to a certain candidate, they can change their minds at any time before the vote.

There are an estimated 461 superdelegates that have yet to cast a single vote but pledge to support Clinton in the Democratic National Convention this summer. Many argue that Sanders’ relatively tiny allotment of 26 superdelegates after the March 15 primaries could be his downfall. If you don’t take into account superdelegates, Clinton goes from having twice the number of delegates to roughly a 300 delegate lead over Sanders. Even if Sanders wins Missouri, it’s almost guaranteed that the two split the available delegates, so the difference is unlikely to shift.

Clinton’s overwhelming hold on superdelegates and Democrat’s ban on winner-take-all primaries has made it possible for her to maintain a staggering lead over Sanders, despite losses in Michigan, Oklahoma, New Hampshire, and other contests. Given that these superdelegates have only pledged their preference for Clinton and are not bound, some critics have raised alarm.

Make this Trend! CNN does not add the Super Delegates to Bernie's Total! #feelthebern pic.twitter.com/8ygabQUZ7C

Sanders’s victory over Clinton in Michigan was the biggest political upset in years, but the winnings were slim. Due to the Democrat’s system of proportional allocation, the junior senator from Vermont walked away with only seven more delegates after winning the popular vote by a narrow margin. And long before voters went to the polls or even got a chance to hear the two candidates debate in Flint, nine of Michigan’s 17 superdelegates said they would support Clinton.

What’s the origin of super delegates?

In the aftermath of the politically turbulent 1960s and the Vietnam War, politicians often stayed clear of DNC party politics. But this hands-off approach had consequences when it came to choosing candidates that stood a chance in the general election. Meanwhile, Democrats like George McGovern and Jimmy Carter were losing to Republicans like Richard Nixon and Ronald Reagan.

The Daily Dot spoke to Al From, the former executive director of the House Democratic Caucus and one of the key players who pushed for superdelegate reform in the ’80s. Democrats adopted the superdelegate system as a part of the Hunt Commission in 1984, mostly to allow party leaders and public officials a role in deciding the nominee. The idea for super delegates came from a lunch meeting From attended with then-Governor Jim Hunt and Representatives David Price (D-N.C.) and then-House Democratic Caucus Chair Gillis William Long (D-La.).

From told the Daily Dot that the original intention behind super delegates was to give those in elected office a voice in who got the party’s nomination for president.

“We wanted them to be a part of the party’s nominating process in a way that they didn’t have to run against their own constituents,” says From.

But much has changed since then, From says. With 24/7 election coverage made possible by television and the Internet, it’s not possible for Washington to sequester themselves from the horse races.

Superdelegates “are much of a different deal now then back then—we’re talking almost 35 years ago,” From says. “We didn’t have Internet. No cable television. People were dependent on newspapers. What I was involved in was the original effort to try to find a path to get senators, governors, and elected officials more involved in party affairs. Now it’s a whole different deal.”

Despite the changing nature of the electoral system, From doesn’t think it’s time for the DNC to get rid of superdelegates. In fact, he think it’s important for top elected officials to be a “leveling force” in the party’s presidential nomination process.

By definition, a superdelegate is not bound to a candidate and can switch until they actually cast their vote at the DNC convention in July. Superdelegates can publicly “pledge” their support for candidates. This is the number that gets tallied by delegate trackers, such as those by the Associated Press and Real Clear Politics.

According to Virginia superdelegate Frank Leone, unpledged party leader delegates may commit to support a candidate, but she can then choose to support a different candidate.

“It’s not fixed until they get to the convention and actually vote,” says Leone. The most recent example of many superdelegates switching was in 2008, as Barack Obama, then a senator, gained momentum in the later primaries. Leone says he knows at least one Virginia superdelegate who committed to Clinton and later switched to Obama.

But switching is still rather uncommon, and there’s no evidence that any of Clinton’s superdelegates will switch to supporting Sanders. Josh Putnam, a lecturer at the University of Georgia who is the brain behind presidential primary blog Frontloading HQ, told the Daily Dot in an e-mail that it’s relatively rare for superdelegates to switch their support to another candidate.

“It has not been all that common,” says Putman. “It tends to occur most in competitive races when the vote of the superdelegates might matter in terms of the outcome of the nomination. But again, that is not that often.”

Why don’t Republicans have superdelegates? And what do they have instead?

But if a candidate drops out, their delegates could also become unbound. States and their parties have different rules for how to handle this category of unbound delegates. In light of Ben Carson, Jeb Bush, and now Marco Rubio dropping out, their combined total of 177 delegates could (depending on their state’s rules) become free agents at the convention.

Can superdelegates determine who gets the nomination?

Critics have blamed the Democratic Party’s system of superdelegates for “rigging” the party’s presidential nomination process. Superdelegates even got Daily Show treatment during the 2008 election cycle. “Superdelegates are just like you, except their vote is worth ten thousand times more than yours,” jibed Daily Show comedian Jason Jones in one 2008 sketch. 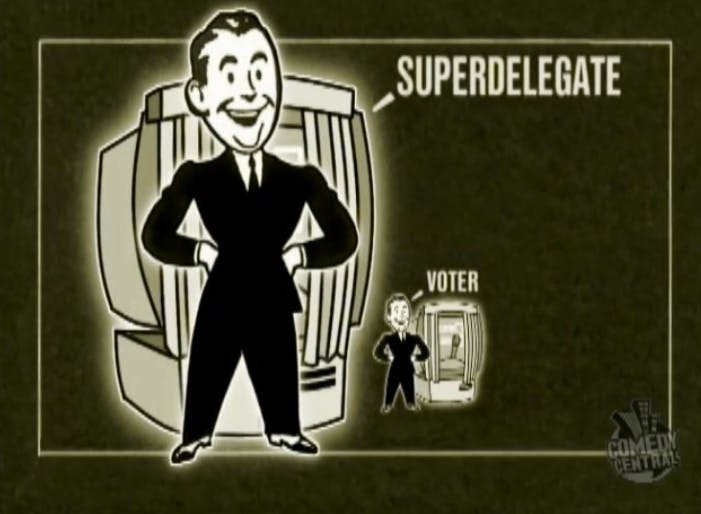 The notion of party insiders deciding the party’s nominee doesn’t sit well with most voters. Superdelegates become especially controversial when people think they can tip the scale in favor of a candidate who doesn’t already have the lead in the popular vote or regular delegates. But so far, experts say, this has never happened.

Putnam tells the Daily Dot that superdelegates have only “come close to being consequential” on two occasions.

The first was in 1984, when more superdelegates flocked to Walter Mondale despite challenger Gary Hart’s victory in Ohio. In 2008, there was a brief period when some thought the race between Clinton and Obama for the Democratic nomination would come down to Clinton’s lead in superdelegates. But by the time of the DNC convention, Obama was leading in both superdelegates and the popular vote.

“In neither case did the group of superdelegates swing the nomination away from the popular vote in the primaries and caucuses,” says Putnam.

Of course, says From, “there’s also a first time for everything.”