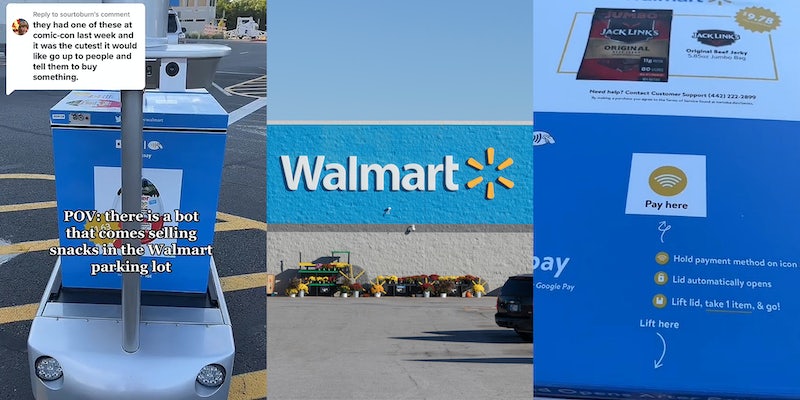 'Who the f*ck wants a Kinder Egg or beef jerky mid-walk in the parking lot.'

Walmart caught headlines earlier in the year after announcing that it would be deploying a team of remote-controlled robots to its parking lots.

With help from tech startup Tortoise, the venture was initially pitched as “automated vending machines that can drive to a shopper’s vehicle.”

“Once shoppers tap and pay with a credit card, the lid opens so they can grab their item,” explain writers Nancy Luna and Ben Tobin for Insider. “Walmart said it’s piloting the Tortoise robot at ‘store 100’ near its Bentonville, Arkansas, headquarters ‘to see if customers enjoy a mobile vending experience.’”

While much of the reporting on these robots stopped there, internet users were far too curious about the robots to let the story die. Accordingly, TikTok user Sarah (@reallifesarah918) decided to visit the store back in July and catch the test in action for a video that now has over 185,000 views.

The results speak for themselves.

Basically, the robot drives up to customers and tells them that it is a “smart store.”

From there, the robot tells customers they can choose from one of two items, in this case, Kinder Joy and Jack Links jerky.

If the customer wants one of the two items, they can use Apple Pay, Google Pay, or a tap-to-pay credit card to get the container to open and allow them to remove the item in question.

With the transaction complete, the robot rolls away and on to the next customer. When there is no customer to be found, the robot appears to simply wander the parking lot, per another video from Sarah.

While it appears the machines are operating by themselves, they are not actually self-driving. Instead, Tortoise claims that each robot is “teleoperated by remote ‘drivers’ across the world,” per the company’s website.

At first, some users thought the robot was interesting, with some sharing their own experience with this or a similar device.

“As a kid I was obsessed with the food robots in the pokemon deoxys movie. we’re one step closer to a childhood dream,” wrote one user.

“I think they should install them in LA,” added another. “they love tech like this.”

However, the mood soon turned against the robot.

“Who the fuck wants a kinder egg or beef jerky mid walk in the parking lot,” asked a commenter.

“In my area, the entire thing would be stolen in two hours and they’d abandon the experiment,” stated a second.

“They already have vending machines by the entrances though,” noted a third.

The Daily Dot reached out to Tortoise via email, Walmart via media contact form, and Sarah via TikTok direct message.