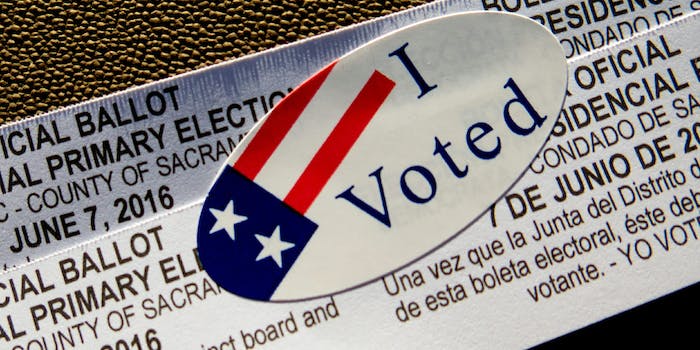 Law enforcement officials have been alerted to fraudulent calls being made to voters in Virginia that are telling them their polling locations were changed, officials confirmed to the Daily Dot.

The calls were made throughout Tuesday and targetedPrince William County, according to the local chapter of the NAACP, which wrote a Facebook post alerting its followers about the calls.

Virginia is one of two states holding gubernatorial elections today. Democrat Ralph Northam is facing Republican Ed Gillespie. The race is expected to be close–with Real Clear Politics finding it essentially a tossup, with an average of polls showing Northam up by 3.3 points.

“The Department of Elections has received some complaints regarding robocalls to voters in Prince William County providing incorrect information related to polling place changes and we have referred the matter to law enforcement for investigation,” a spokesperson for the Virginia Department of Elections told the Daily Dot in an email.

The Prince William County NAACP said the fraudulent calls were coming from Gloucester, Virginia, and Adairsville, Georgia. The group said it alerted authorities about the calls and that they were aware of the situation.

“It is vital that everyone knows these phone calls are fraudulent and are attempted voter suppression,” the post reads. “We as an organization have fought for decades to have as many eligible people in our community participate in the electoral process[sic] as possible; these attempts at voter suppression cannot succeed.”

The Department of Elections urges Virginia voters with questions about their polling place to visit vote.virginia.gov, where they can look up voter registration information and where they are designated to vote.