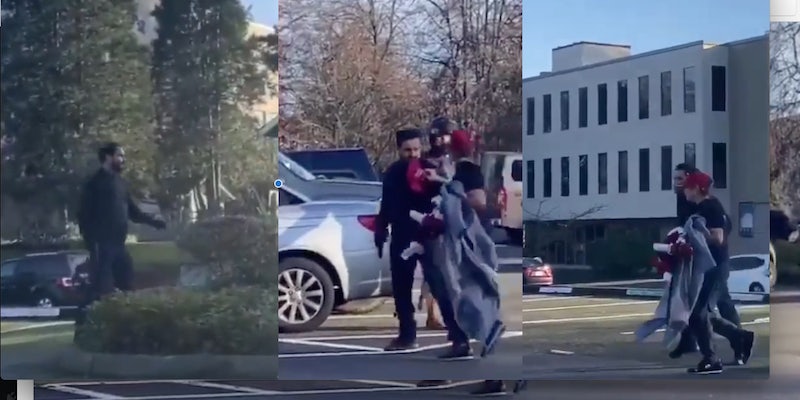 Chaos and violence continued over the weekend, as supporters of President Donald Trump gathered in cities around the nation to protest their false view that President-elect Joe Biden was fraudulently elected. Stabbings and shootings were reported in Washington, D.C., and Olympia, Washington, where angry Trump supporters clashed with counter-protesters.

A video posted on Reddit and first posted by Independent Media PDX purports to show the Saturday afternoon protest where a shooting occurred in Olympia.

The video begins in a parking lot. A man yells off camera, “He just shot somebody! You shot somebody,” as two males in bright red hats rapidly walk away. It’s unknown if they were among those arrested.

Then the video apparently cuts to some time prior. A man holding the camera narrates. He claims that the group he’s filming from across the street, several of whom are dressed in head-to-toe black, have been trying to antagonize them into attacking. “We’re not going to let it happen. We’ve got way more discipline than they do,” he says. “These are your local high school kids basically trying to make a name for themselves.”

A fight breaks out and several men from the cameraman’s side of the street run over. What appears to be pepper spray is then deployed on the crowd. It’s not clear if police are the ones spraying.

Subsequently, a shot rings out. At first the cameraman surmises it’s a flash grenade, then realizes it was gunfire.

“Someone’s discharging their firearm,” he says, backing away. “So we’re going to ahead and move back to a—.” As he turns, you can see people standing around him carrying Trump flags. The camera abruptly cuts to show a person laying on the ground surrounded by police in riot gear. The person, who appears to be male, is wearing a red hat that appears identical to the “Make America Great Again” hats worn by Trump supporters.

The Washington Post reports that about 50-80 Trump supporters, including members of far-right extremist groups the Boogaloo Boys and Proud Boys, some heavily armed, were in attendance. There were about twice as many counter-protesters, some dressed in black, which is associated with anti-fascist groups. After violence broke out, police declared the event a riot and ordered the crowd to disperse.

Three people were reportedly arrested. Police declined to identify the shooter or victim. The Post reports the victim, a Black man, was transported to the hospital. His condition is unknown.

The Daily Kos reports that Trump supporter Forest Machala was the shooter. County records show that a man by this name was arrested on Saturday and charged with first-degree assault. According to records, he is being held without bail.

Machala did not immediately respond to a request for comment sent to a Facebook page bearing the same name and Washington residence.

Other sources online claim that Machala is the Trump supporter referenced in a 2017 Seattle Times article by a student at a local high school. The Facebook profile says Machala’s an alum of the same school, Roosevelt High School. The page includes a picture of him in a Boy Scout uniform.

According to a LinkedIn page in his name, Machala graduated from Roosevelt in 2014 and is an Eagle Scout. It also says he wrote “controversial and insightful articles” for the school paper. In one archived edition of the paper, Machala’s column is called “Real Life Assassin.”

“Ego also drives a lot of people to do dangerous and unnecessary things in order to seek validation and approval from too many people,” the column states.

Thousands of people have commented on the video on Reddit.

“There are far too many people taking their firearms to dangerous situations like this expecting anything other than trouble,” wrote one user.

“The Proud Boys/MAGAts [sic] have been traveling from all over the nation to terrorize Washington,” another said. “They like it because the police let them roam the street and commit violence without repercussions.”

It is unknown whether Machala is affiliated with the Proud Boys.

Reports indicate that Machala will be arraigned today.