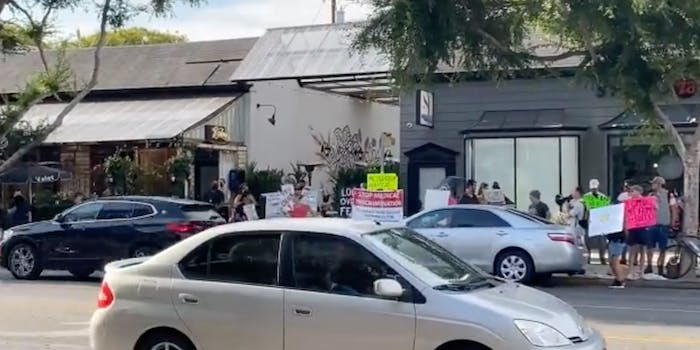 The organizer of the event indicated that the goal was to make the area unsafe in order to drive away business.

A gaggle of anti-vaccination protesters set up outside a restaurant to share COVID conspiracies in West Hollywood, Los Angeles on July 30.

Videos and tweets shared by journalists filming the protest allege that some protesters were armed—and that they chased the reporters into a Trader Joe’s grocery store.

Among the conspiracies touted by these protesters were the 5G tower conspiracy—which alleges that 5G cell towers have aided in spreading COVID-19—and comparing the push for vaccination to Nazi Germany.

Shared by Tina-Desiree Berg on Twitter, the video shows a line of folks with signs outside of the restaurant Harlowe, across the street from where she is filming. The group was protesting Harlowe’s policy requiring folks show proof of vaccination or a negative COVID test to enter the premises, according to WeHo Times. In her tweet, Berg alleges that the protesters are harassing others on their way to dinner.

It’s not clear how, but when the protesters realized they were being filmed, Berg wrote that they chased journalists into a Trader Joe’s store across the street, where a manager temporarily closed the store, she wrote.

“A mob of anti vaxxers just came across the street in a menacing fashion,” she wrote. “They chased several journalists into the Trader Joe’s. The manager temporarily closed the store.”

Another journalist who was filming the protest, Sean Beckner-Carmitchel, said he was chased by members of the group who he says were armed.

“Members of the group began running towards me, several armed,” Beckner-Carmitchel wrote. “Seeing some brass knuckles. Backed into the first open door available, which happened to be a Trader Joe’s. Several followed inside, several other photogs were ended up inside. Many in the crowd waiting outside.”

Follow-up tweets show that he “slipped out the back,” for a safe exit.

Beckner-Carmitchel said he spoke to a lieutenant with the Los Angeles County Sheriff’s Department that evening. A Lt. Aguirre allegedly told him that the department received noise complaints as well as isolated but unconfirmed acts of violence.

“Anti-maskers still outside as of about 9:15. Spoke w/ Lt. Aguirre of LASD WeHo,” Beckner-Carmitchel wrote. “(1) Asked if they’ve heard complaints: ‘Received mainly noise complaints, received isolated reports from the public involving possible acts of violence but haven’t been able to confirm that yet.'”

Another journalist, Vishal P. Singh, said that the protesters broke several bones in their face during an altercation in which protesters claim Singh pepper sprayed them. In a video posted to Twitter, it appears that Singh begins spraying after being punched and surrounded by a group of protesters.

Singh alleges that professional MMA fighter Mike Ancheta was the person who assaulted them and that Ancheta has been “stalking” them since late 2020.

Singh also shared a recording from an Instagram Live, in which the reported protest organizer Jason Lefkowitz described the events as making the area “unsafe.” In the Live, Lefkowitz calls this a “good” outcome because it would hurt the businesses nearby, such as Harlowe and Trader Joe’s.

“What’s kind of good about this is that, in my eyes, it’s making the area unsafe,” Lefkowitz said. “And so it’s going to hurt the business even more.”

When the video shared by Berg made its way to r/PublicFreakout, users began criticizing the basis of the protest, where discussion turned to a lack of education, specifically regarding vaccines.

Another commenter who claims to have been included in a vaccine trial expressed frustration with those who are unwilling to learn about how vaccines work.

“I’m so tired of it. Ive been called ‘a know it all’ for explaining infectious zoonotic diseases and how vaccines work,” u/FractiousPhoebe wrote. “I’m also in a vaccine trial so I was educated on the process when I signed up. The fact that I have to understand these things for my career mean nothing to these people. So unless people want to learn I just don’t bother anymore.”

The Daily Dot has reached out to the LASD, Trader Joe’s, Beckner-Carmitchel, Berg, and Singh. Lefkowitz and Ancheta could not be reached for comment.