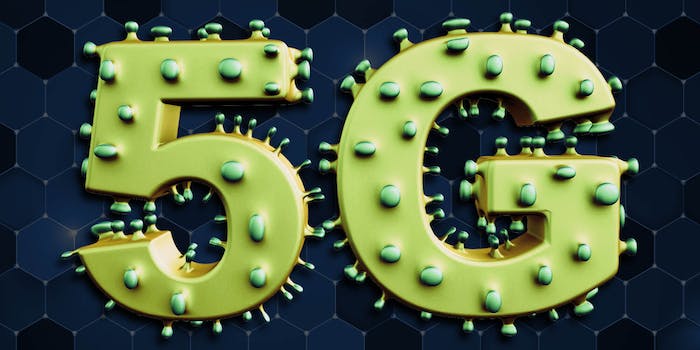 Why 5G inspires so many conspiracies

In March, President Donald Trump signed into law the Secure 5G and Beyond Act, calling for the United States to be a principal driver in securely enacting this powerful communications technology.

And in a time when Congress can’t agree on anything, both Republicans and Democrats agreed that 5G represents a massive breakthrough in the way we communicate and web surf, bringing with it major advantages in terms of speed and connectivity.

Once completely rolled out, 5G internet will be much faster and reliable than anything that’s come before it. But like any major new technological feat, it has drawbacks and risks as well. Some are aesthetic, some revolve around privacy, and others are simply conspiracy theories.

Since the beginning of the coronavirus pandemic, conspiracy theorists and anti-technology activists have consistently pinned at least some of the blame on 5G cell phone technology causing or exacerbating the virus.

Despite there being no scientific validity or compelling evidence in favor of these theories, 5G has been reframed as a super-weapon capable of sickening large swaths of humanity through the virus, and tracking anyone who survives the pandemic.

Because of it, 5G towers around Europe have been subjected to vandalism and arson, engineers installing 5G tech have been attacked, and a whole lot of misinformation has gone viral—freaking out millions of people that their new cell phone is trying to kill them.

5G is a complex technology, and completely understanding it requires a detailed knowledge of telecommunications, electronics, radio, and internet. And in the internet age, technologies like 5G are ripe for misinformation and rumor.

So what does the typical potential 5G user need to know about the future of cell phone service? And are any of the conspiracy theories real?

What is 5G technology?

Because of this, 5G is seen as a game-changer in terms of providing more and better internet service to developing nations and rural areas.

It uses a broader range of frequencies than any past cell phone technology—high, medium, and low band networks. But none of these frequencies are new. They’re mostly the same ones used by radio since it was first adopted around the world.

5G was first announced in 2010, with products introduced in 2018, with the first specialized 5G smartphone released in March 2020.

How is 5G different from previous generations?

The biggest upgrades from 4G to 5G are faster download speeds, higher bandwidth, and shorter lag time in its communications between devices and servers. When fully activated, 5G internet will be almost 100 times faster than 4G, will provide significantly more data capacity than 4G (allowing for more devices to use it at the same time), and will be accessible by a range of devices that weren’t previously designed to have high-speed internet access.

Theoretically, a large crowd full of people with 5G phones will all be able to nearly instantaneously upload and download large files with no lag time or slowdowns; and people nearest to 5G towers will be able to link every internet-capable device in their home together.

The rollout of 5G technology will take several years, with about half of the U.S. having access to it by the end of 2020, and the super high-speed download bandwidth available to all major cities by 2023. But it will still take years after that for all new devices to be 5G-capable.

Why are there so many 5G towers going up?

One of the biggest drivers of misinformation about 5G is the number of towers being put up around the world, with a 5G tower seemingly going up around every corner in major cities.

But without these towers, 5G can’t reach its full potential. To provide the fast speeds and high accessibility 5G promises, it will need to use every available radio wave spectrum, including the high-band spectrum, which requires numerous transmission towers spaced at short intervals beaming signals back and forth.

In urban environments, these signals can be blocked by walls and buildings, meaning that the towers have to be pretty much everywhere. It’s likely that the middle band of the radio spectrum will eventually be the one most used by 5G, requiring fewer towers, but it will also be slower than the fastest speeds that cell phone companies are promising.

High-band spectrum 5G won’t be fully available for nearly a decade, with it taking that long to build all the needed towers.

Is 5G technology safe for humans?

Despite the many conspiracy theories about 5G, the overwhelming scientific consensus is that the electromagnetic fields (EMF) generated by 5G are safe for humans and animals. There is no compelling evidence that 5G devices, such as cell phones or tablets, emit harmful radiation that’s damaging to life.

Only one study, a 2016 scientific examination of how radio signals affect rats, showed even the potential of harm when a slightly higher number of rats in the group exposed to electromagnetic radiation developed tumors. But subsequent analysis showed that these tumors were probably unrelated and just a random coincidence.

The radiation put out by 5G towers and cell phones is non-ionizing, like that of microwaves or regular radios, meaning it’s not strong enough to hurt humans.

It’s not the potentially harmful ionizing radiation of gamma or X-rays, which can cause serious damage to unprotected organs. There’s also no evidence that 5G masts are responsible for animal deaths, including several large bird die-offs that were blamed on the new technology, but aren’t related.

How did 5G coronavirus theories start?

Beyond the general concerns about 5G’s impact on human health, the most prevalent conspiracy theory about the technology is that it’s linked to coronavirus.

Since the pandemic first broke out, conspiracy theorists have pushed ideas that the emergence of this new technology was designed to go hand-in-hand with the virus; through a number of ways. It started in mid-March with a video by a discredited American doctor who claimed that 5G “poisoned” cells to the point where they “excreted waste” that manifested itself as the novel coronavirus.

That video was immediately debunked by experts, but the cat was out of the bag.

It was followed by videos that touted 5G as a spreader for radiation that weakened the immune system enough to make people vulnerable to coronavirus, that 5G towers will interface with RFID chips implanted in all humans to make them easier to track, or that Bill Gates was somehow involved in the rollout of both coronavirus and 5G, working together.

None of these are true. The radiation put out by 5G towers and devices is non-ionizing, meaning it’s not strong enough to be harmful to humans. It certainly doesn’t weaken the immune system, cause cells to “excrete waste,” or “activate” a virus.

Those things either aren’t real or aren’t related to telecommunications equipment. Viruses and radio waves have nothing to do with each other, and there’s no plausible biological mechanism for them to interact.

Are there downsides to 5G?

With so many unsecured devices linked to each other, 5G technology is vulnerable to both hacking and unwanted surveillance by criminals and government agencies. Upper-band 5G signals have the potential to interfere with weather and surveillance satellites, impacting both storm tracking and national security.

The numerous towers that will need to be put up in cities around the world are ugly and draw attention to themselves; and there’s real fear among urban planners that cities will be overrun and have to drastically change their architecture to make the towers blend in. And rural and low-income areas that don’t have the technological infrastructure for the highest-speed 5G will fall behind higher-income urban areas in terms of connectivity and speed.

There is also genuine concern among U.S. officials that despite production delays due to coronavirus, China will be the leader in developing and marketing 5G networks and devices— bringing with it the threat of monopolizing the technology to use against the West. These are legitimate issues related to 5G.

But none are conspiracy theories.