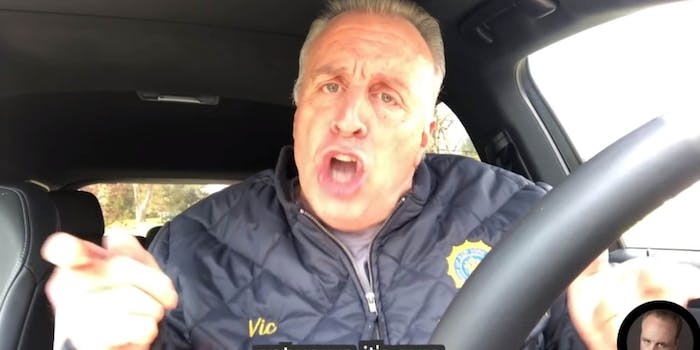 'Vic Dibitetto is the voice of the people.'

YouTuber Vic Dibitetto has amassed nearly 300,000 followers with his hilarious videos, but his most recent contribution is taking on a very serious subject matter: the havoc the coronavirus is wreaking on the lives of everyday Americans.

In his recently uploaded video, “Ticked Off Vic: A Message to the Government,” Dibietto paints a very clear picture of the difficulties faced by millions across the nation who have been forced into quarantine by the pandemic and calls out the government for failing to properly intervene to support average folks in this difficult economic time.

“You know what ticks me off?” Vic asked in the video, before beginning his rant. “Having to tell the government what to do because they have their heads in their asses.”

He then launched into an expletive-ridden diatribe addressed to the government, with spittle visibly flying from his mouth.

“You told us to shut down non-essential businesses,” he said to the country’s leaders. “You told us to go home and quarantine. You told us we have to keep social distance and stay inside. But you told us you would help. So where is the fuckin’ help?”

Dibitetto then went on to offer a clear-cut plan for how bankers and the government could help Americans, chastising the single $1,200 stimulus checks sent to citizens as insufficient, because it fails to even begin to cover the litany of monthly expenses the typical household incurs. His anger is very palpable.

“Tell the fucking banks and mortgage companies to stop all mortgage payments at this time,” he said. “And don’t give me that three-month furlough bullshit.”

Dibietto recommends that mortgage payments be tacked on to the end of loans, instead of bankers expecting lump sums at the end of the three-month furlough period adopted by many institutions in the country. He also had strong words for banks, which have been the recipient of massive bailouts during this economic downturn, despite making significant profits over the past few years.

“You literally make billions of dollars in profits every quarter,” the comedian said of bankers. “How come We the People have to save for a rainy day, but you save nothing?”

Since being uploaded a few days ago, the video has gone viral, with millions of views and thousands of shares.

“This is the fire we need. Whoever this guy is…. thank you!” user @JCampbellVA75 tweeted, along with a snippet of the video.

For many, Dibietto’s rant expressed everything they have been thinking.

“Vic Dibietto is the voice of the people,” user @chilisupmynose declared.

Others pledged to vote for him, should he ever run for government office.

“Vic DiBitetto is really angry. So should you be. If he ran for Congress as a Republican, Democrat, Independent, or whatever I don’t care, I would vote for him,” user @KFitzcarldo tweeted.

The recently enacted CARES Act allows homeowners to request two periods of mortgage-payment forbearance or suspensions for up to one year. However, it does stipulate that any deferred payments must still be eventually made, either as a lump sum or tacked onto the end of a mortgage.

Clearly, for many, including Dibietto, the government and banks need to do more to prove they care about the American people in this difficult time.