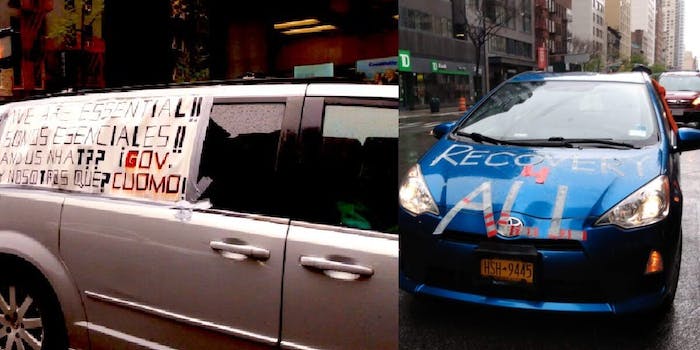 Undocumented workers denied stimulus funds are protesting across the nation

The stimulus isn't being equitably distributed.

Protesters online and in the streets are using the hashtag #EssentialAndExcluded to highlight how certain communities are disproportionately affected by coronavirus and the subsequent government response.

Many are raising the issues as it became clear how many people were excluded from stimulus checks that came as a response to coronavirus lockdowns.

As the stimulus checks have started rolling in for people across the country, there is a growing conversation about those who have been left out of the relief package. Workers such as janitors, day laborers, domestic workers, and healthcare staff are still being made to work, considered essential employees. But many of them are not receiving any benefits because they’re undocumented. For them, not doing their work would mean they have no income; and going into work under these circumstances means they’re at a high risk of being exposed and, in turn, contracting coronavirus.

It’s put them in a frustrating spot.

On Tuesday, workers’ right organizations gathered in a caravan of more than 60 cars outside New York Governor Andrew Cuomo’s office in Manhattan to protest against stimulus funds being denied to these communities.

The protests spanned across three blocks, according to organizers who also helped put together a similar protest in Los Angeles, California last week.

Organizers recorded about 200 cars in the caravan at the protest in L.A. A day after that protest, California Governor Gavin Newsom announced a $125 million disaster relief package specifically for the undocumented workers of the state.

Salvador G. Sarmiento, campaign director at National Day Laborer Organizing Network (NDLON) that organized the campaigns, says while there is “no magic bullet” that brought in Governor Newsom’s announcement, their movement was a crucial part in “a growing chorus of groups that were making it really clear: you can’t just turn your back.”

Sarmiento told the Daily Dot that Tuesday’s protest in New York brought together 100 protesters who demonstrated while staying inside their cars and maintaining social distancing.

Given current circumstances, with many people unable to go out to the streets, others showed solidarity on social media with #EssentialAndExcluded and #YNosotrosQue (what about us?):

Sarmiento says they’ve been hearing about the fears and dilemmas of day laborers and undocumented workers who are “confronting these realities at the local level” and that is where #YNostrosQue, “what about us, what will we do?,” originated.

“It’s not an exaggeration to say that some lives are at stake and without that assistance, some folks are forced to put themselves at risk, will get sick and will die because of these exclusions at the federal level,” Sarmiento told the Daily Dot.

Following their protests, they’ve received calls from organizers in other parts of the country, such as San Antonio and Miami, who are also looking to bring the issue to their respective governors and mayors.

While they acknowledge that now is a difficult time to organize in person, they feel that they’ve been able to use social media to their advantage.

“We might be physically distanced but we can’t be socially absent,” says Sarmiento.

Meanwhile, their activism on social media has helped raise funds.

“Social media has played a huge role in our campaign for funds to help the day laborers,” Viridiana Vidal, one of the organizers with NDLON, told the Daily Dot. “We have received hundreds of thousands in donations and support from many personalities.”

While Sarmiento has been disappointed with Governor Cuomo’s approach, he says he is hopeful that things will turn around because hope is their only option.

“The federal government has been really clear what they think of our immigrant communities and what [President Donald] Trump is doing this week only reaffirms what we already know,” he said, in reference to President Trump’s recent tweet about temporarily halting immigration. “So the failure of the federal government has left this huge gap between immigrants and emergency assistance. We need localities and states to fill that gap.”