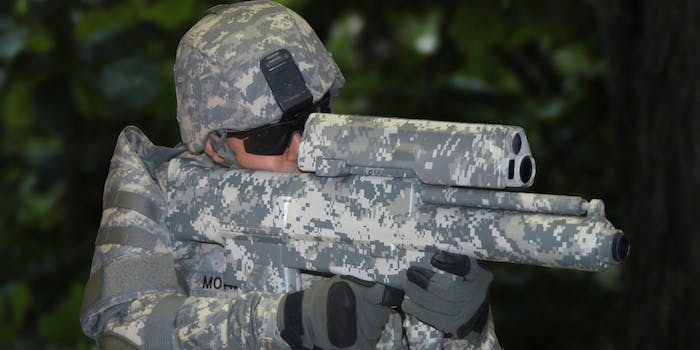 After acquiring a 3D printer, the U.S. Army wants to print a warhead

Because who wants to build life-destroying bombs the old-fashioned way?

The U.S. Government is getting a lot of use out of its 3D printers. After NASA decided to allow the public to make desk trinkets out of probes and asteroids, The U.S. Army is putting its 3D printing prowess to more use as it tries to print warheads, according to Motherboard.

Yes, you read that correctly: The U.S. Army wants to print warheads. James Zunino, a researcher at the Armament Research, Engineering, and Design Center told Motherboard “3D printing of warheads will allow us to have better design control and utilize geometries and patterns that previously could not be produced or manufactured.”

3D printing warheads would theoretically allow for smaller parts, which can lead to a bigger payload, or more security measures. It will also save the U.S. Army money, according to Zunino. “It is expected that 3D printing will reduce life-cycle costs of certain items and make munitions more affordable in the long run through implementation of design for manufacturability, and capitalizing on the add capabilities that 3D printing and additive manufacturing can bring to munitions and warheads,” Zunino told Motherboard.

This isn’t the U.S. Army’s first use case for 3D printers, as it is almost ready to use bioprinted skin on soldiers on the battlefield. The U.S. Army is also actively developing 3D printed blood vessels, and hearts, according to Motherboard.

Speaking to Army Technology, Thomas Russell, director of the U.S. Army Research Laboratory said “many of the injuries soldiers receive the field are not traditional. A lot of the medical community sees [3D printing] as a new approach to medicine. We can 3D scan injuries. We can replicate with those injuries are. Surgeons and medics can practice on those specific types of injuries and provide better service to the warfighter.”

While healing soldiers may be the top a priority, warheads aren’t far off, and a full-fledged 3D printed missile is apparently on the mind of many in the Army. “Maybe someday an entire warhead or rocket could be produced as the technology further matures,” Zunino said.