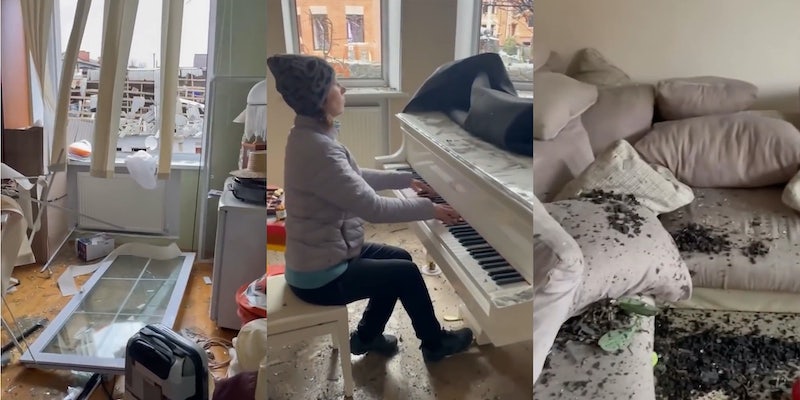 ‘I just burst into tears’: Ukrainian pianist plays Chopin one final time at her war-ravaged home in viral TikTok

'This is so beautiful but also so heartbreaking.'

A Ukrainian woman returning to the piano in her war-torn apartment has captured millions of viewers of TikTok.

The video has now garnered nearly 2 million views and over 250,000 likes, as users pour in their admiration for her skills and resilience. It also went viral on Reddit.

The original TikTok, posted by @kkkarysia, shows a Ukrainian home in ruins. The couch is covered in debris, the door has been blown off its frame, and shattered glass covers the ground.

In the midst of the chaost, a woman sits down at a piano miraculously intact and expertly plays what users identify as a Chopin piece.

British publication Metro has identified her as professional pianist Irina Maniukina, who has come to visit her home in Bila Tserkva, about one hour south of Kyiv, one last time before fleeing.

Maniukina’s daughter Karina filmed the video and said, ‘It wasn’t a sad moment. My mother just wanted to let go of unnecessary thoughts, and I remembered events in our house with a smile,” according to Mirror.

The family has now fled 300 miles west to Lviv, according to Mirror.

TikTok users has flooded the comment section, saying the performance has them overcome with emotion

“The only TikTok that deserves to be 10 minutes long. I would love to hear more,” said @used_sui.

“I just burst into tears.. this is so beautiful but also so heartbreaking,” said @minkook515

Many users also drew comparisons to the 2002 film The Pianist, where Adrien Brody’s character also plays a Chopin piece in an emotional scene.