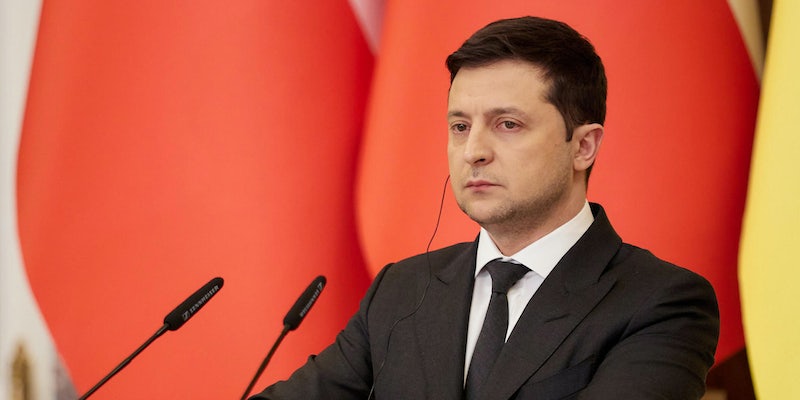 Claims about Zelenskyy's 'fortune' may be intended to undermine him.

Russia’s invasion of Ukraine has made a hero of Ukrainian President Volodymyr Zelenskyy. Zelenskyy’s unlikely turn from comedian/actor to world-famous statesman has helped attract global attention and support for his nation as he uses his media savvy to communicate on the world stage.

As Ukraine fights to maintain its independence, loyalists on both sides are weaponizing the internet by spreading disinformation and propaganda. Thus far most agree that Ukraine is winning on this front.

In what may be an effort to undermine support for Zelenskyy and Ukraine, in recent days wild rumors have begun spreading online about Zelenskyy’s net worth.

Social media users—some with tens of thousands of followers—are now claiming that Zelenskyy’s net worth is anywhere from a hundred million dollars to $1.5 billion.

In reality, he’s likely worth a fraction of that. In his 2019 financial disclosure, Zelenskyy reported he was worth roughly 30 million Ukrainian—or nearly 1 million dollars. Several sources report that he’s now worth $1.5 million.

It’s not unheard of for heads of state to enrich themselves while in office, but there have been no credible reports that Zelenskyy has done so.

Some making such claims about Zelenskyy may simply be confusing him with his predecessor, who is a billionaire, or misreading “million” as “billion.”

Other estimates of his net worth appear to have been plucked out of thin air.

A celebrity gossip website based in India gives wildly inconsistent estimates of Zelenskyy’s supposed fortune. It claims he’s worth $96 million and $596 million and that his salary is $780,000 annually but also that his monthly income is $1 million.

A social media user linked to the site and wondered, “A MAN OF THE PEOPLE? […] Can this be true?”

Another website says Zelenskyy “holds a magnificent and phenomenal range of net worth which is $705 million.”

Many Twitter users have cited this figure. “How does a politician who previously worked as a comedian and actor come to a net worth of $705 million?” wondered one, writing in Dutch.

Another, also writing in Dutch, said they had a “natural distrust” of Zelenskyy based on his $705 million fortune.

Yet another website claims that Zelenskyy has $98 million in the bank.

Such rumors are fueling distrust and speculation. Some have accused Zekenskyy of using his office to enrich himself.

In some cases, those repeating unverified claims about Zelenskyy’s supposed fortune are also encouraging support for Russia.

“Nail him [Russian president Vladimir] Putin,” urged one on Twitter. (No one knows Putin’s precise net worth, which is a closely guarded secret, but Fortune reported last week that it’s believed to be anywhere from $70 to $200 billion.)

Russia is widely considered to have one of the most sophisticated propaganda machines in history.

Nevertheless, many around the world believe it’s thus far been outmaneuvered by Ukraine and President Zelenskyy in the battle for hearts and minds.