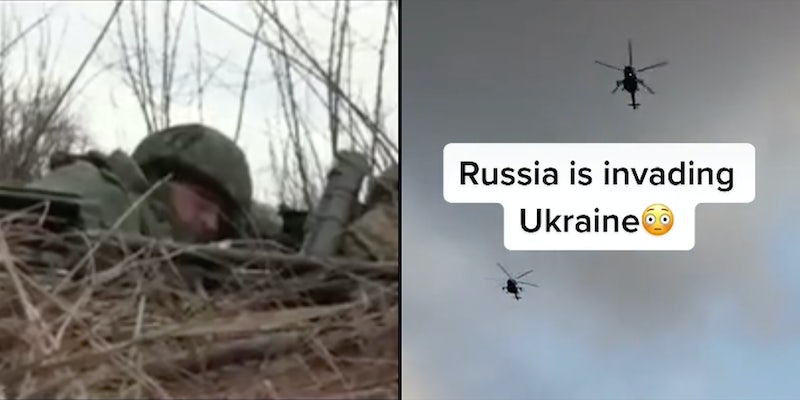 Some of the TikToks appear to be authentic—but some don't.

The Russian invasion of Ukraine may be the first war documented on TikTok. Some TikToks appear to be authentic, while many are not. Some are being posted by aggregators and passed off as originals. Others are being altered or faked.

The world is watching. And while some are utilizing the platform to document a war in real-time, other TikTok opportunists are eager to cash in on the attention.

After months of buildup, Russia invaded Ukraine this week. Russia’s assault is being conducted via ground, air, and sea.

Social media is full of accounts of the fighting and terror in Ukraine. TikTokers are posting footage of missiles, explosions, helicopters, planes, and destruction.

For some, Russia’s unprovoked invasion of its neighbor is simply an opportunity.

Many accounts that appear to be posting inauthentic content or swiping others’ posts are asking for money or selling merchandise.

Others seem to simply be chasing clicks—to great success. TikToks claiming to be of the fighting and destruction in Ukraine are garnering millions of views.

But amidst the onslaught of questionable posts, there are some that appear to be legitimate. As the Washington Post reported earlier this month, TikToks from near the Ukrainian-Russian border were among the sources experts consulted to cast doubt on Russia’s repeated denials that it was preparing for war.

In the last few days, their feeds have taken a somber turn.

In the last few days, TikToker Garmoniya (@gar_moniya) has posted footage showing a path of destruction of unknown cause on a city street. Soldiers stand nearby outside a building with broken-out windows and other damage. Power lines are down.

A person in the comments who says they’re translating the dialogue claims Garmoniya is saying that windows are shattered, roofs are gone, and the power is out. She wonders how they’ll stay warm, they say.

People in the comments believe that Garmoniya is actually in Donetsk, Ukraine, a city on the eastern side of the country where fighting is taking place.

“I hope everyone understands that this one is actually real. This woman is posting in a war zone on TikTok trying to not die. Take that in as you sit,” wrote one on another of Garmoniya’s TikToks.

Another TikTok of Garmoniya’s that has since been removed from her account is making the rounds on social media. It shows a missile strike.

Her recent posts, some which appear to be from the same area as Garmoniya’s, show destruction and convey a sense of doom.

Russia’s invasion of Ukraine has the world on edge. Many fear that this is only the beginning of a multinational conflict that could spill far beyond Ukraine. The world’s eyes are fixed on Ukraine’s fight to maintain its independence. As in previous wars, the battles will be covered extensively by traditional media around the globe.

This war will also be broadcast on TikTok.