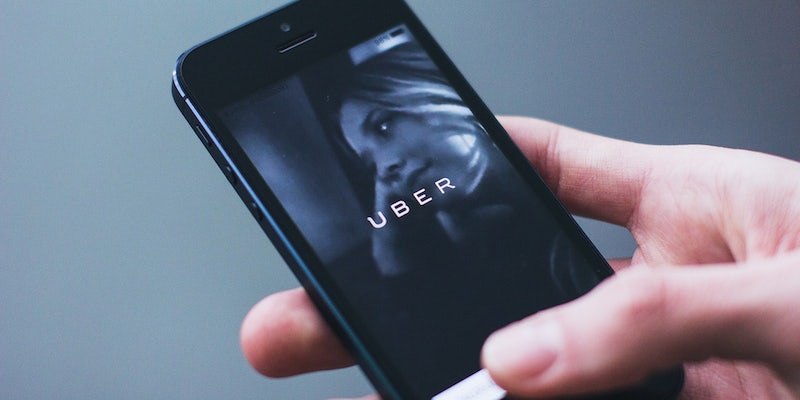 Uber employee says company has no plans to leave Austin

Will Uber really leave the Texas capital if Proposition 1 fails on May 7? One employee says no—but, it’s complicated.

Austin, Texas, will begin early voting on Prop 1 next week. It will allow transportation network company (TNC) drivers to operate in the city without being vetted through fingerprint-based background checks, keeping the present safety measures in place.

Though Uber and Lyft have stated in the past that they will leave the city if the proposition fails, an online exchange between an Uber employee and a prospective Uber driver brings the TNC’s commitment to the claim into question.

The Daily Dot has acquired a verified chat between an Uber employee and a prospective Uber driver, assuring the driver that Uber has no plans to leave Austin regardless of the election outcome. 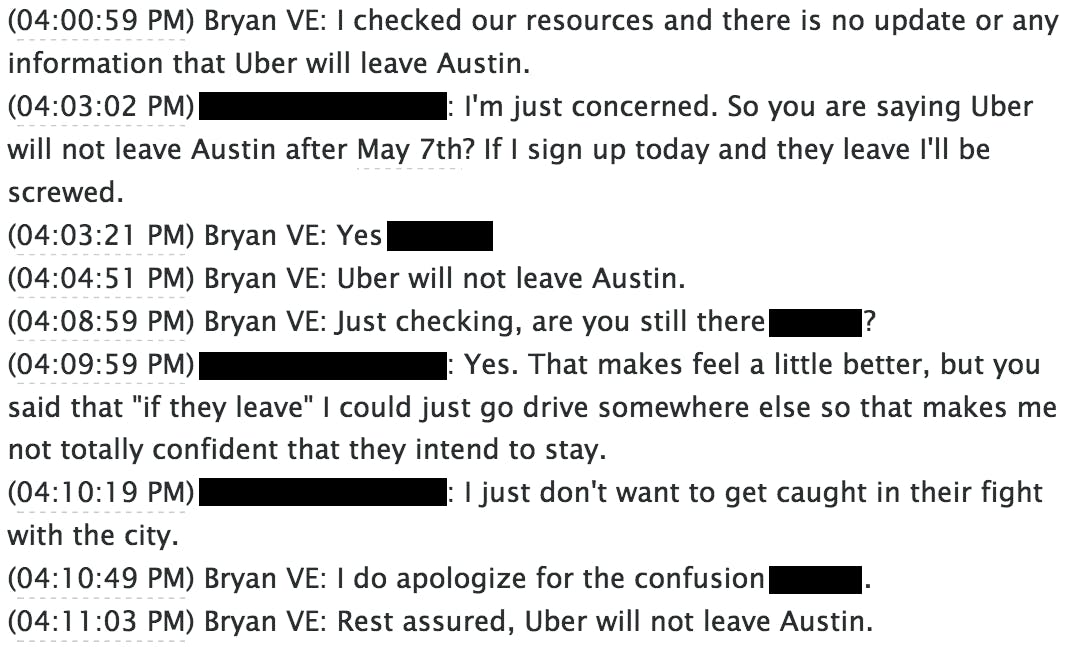 On Wednesday, Uber hosted an Xchange Leasing “Dealer Day” at Clay Cooley Nissan, an Austin dealership. According to Uber’s website, qualifying drivers must put down a $250 security deposit in order to lease a vehicle through the program.

In the online exchange, the prospective driver asked if they would need to pay that $250 on an Xchange vehicle in the event Uber leaves Austin after the May 7 election. The employee then assured the potential driver multiple times that the TNC would not leave Austin, though the employee did not mention the election in his responses.

Identifying information of the potential driver, a self-admitted Prop 1 opponent, has been redacted from the transcript screengrabs. 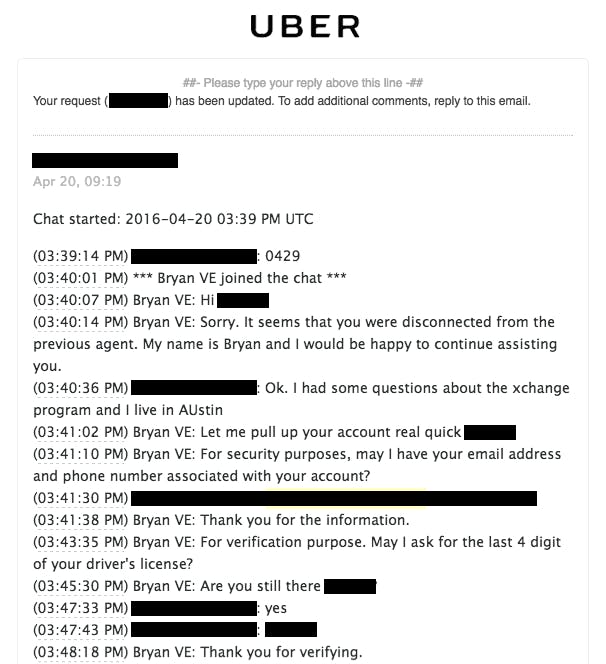 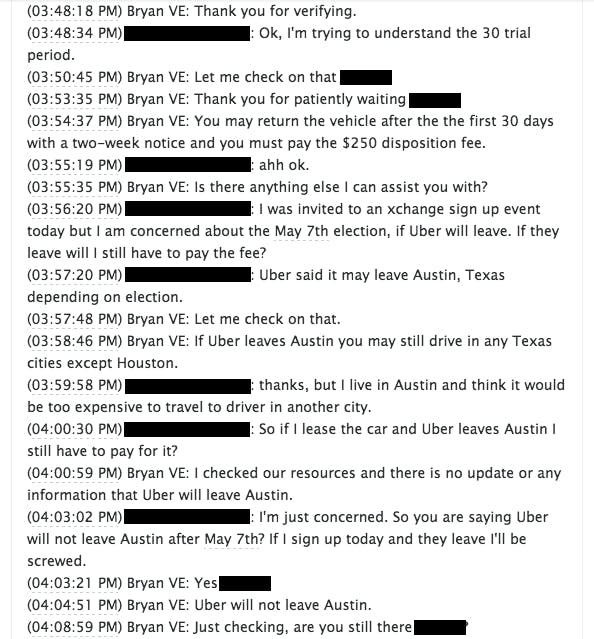 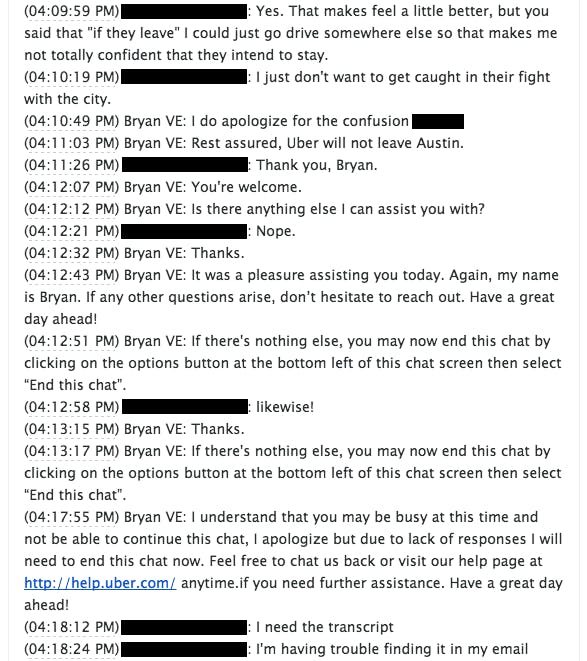 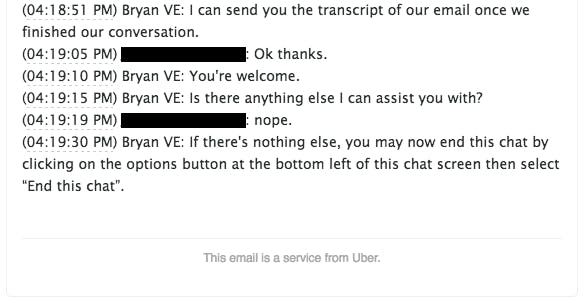 But in response to the Uber employee’s assertion that the TNC will not leave Austin, Jaime Moore of Uber Technologies told the Daily Dot that yes, Uber plans to leave should Prop 1 fail. She said leasing applicants are being advised of this corporate position.

(A manager for Clay Cooley Nissan did not reply to a request for further information regarding the leasing program.)

The program is continuing for now, she said, because drivers could still theoretically drive for Uber in neighboring areas like Round Rock, Texas, should it leave Austin.

Moore added that it’s disappointing to see a Prop 1 opponent “trying to trick one of our customer service representatives into a response that could be taken out of context to confuse voters.”

Said Moore: “A vote for Prop 1 will keep Uber in Austin and prevent a city takeover of background checks that would cost taxpayers millions.”

Ridesharing Works for Austin, the pro-Prop 1 PAC for Uber and Lyft, has also changed the message on recent “Vote FOR Prop 1” literature—adding the subsequent effects of voting for and against the proposition, and removing the claim that voting for Prop 1 will “keep ridesharing in Austin.”

Ridesharing Works for Austin spokesperson Travis Considine did not reply to a request for comment on the PAC’s tweaked campaign language. 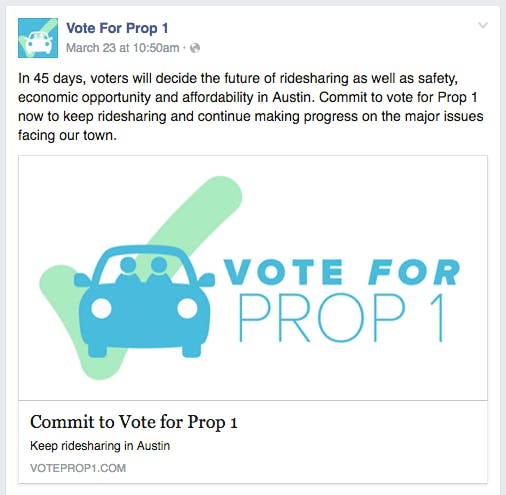 Uber and Ridesharing Works remain at odds with members of the Austin City Council. In December, the council passed an ordinance requiring fingerprint-based background checks for TNC drivers.

Council Member Ann Kitchen, one of the prominent members for requiring TNCs to conduct fingerprint-based background checks, told the Daily Dot that Uber and Lyft’s decision to leave Austin is not being pushed by the city council or by the former ordinance that Prop 1 will replace if passed.

“I think it’s really a disservice to their customers and their drivers to threaten to leave, and I can’t imagine why they would,” Kitchen said. “If they value this community, which they claim to, I don’t know why they would leave.”

Council Member Kathie Tovo told the Daily Dot that though she hadn’t seen the specific exchange in question, it wouldn’t surprise her if Uber remained in the city should Prop 1 fail.

“Austin is a very strong market for transportation network companies. Clearly a lot of Austinites use the service and will continue to do so in the future,” Tovo said. “Uber operates in Houston and New York City with fingerprints so I certainly hope that both of them [Uber and Lyft] would choose to stay when Proposition 1 fails.”

“I think it’s really a disservice to their customers and their drivers to threaten to leave, and I can’t imagine why they would,” Kitchen said.

In response to a request for comment from Austin Mayor Steve Adler on Uber’s claim to leave the city if Prop 1 falters, Adler’s Communications Director Jason Stanford told the Daily Dot that Adler has no additional intel on Uber’s position, and could not speculate as to what might happen after the May 7 vote.

On Tuesday five council members spoke at a press conference regarding political advertising distributed by Ridesharing Works for Austin, asserting that “Uber and Lyft are running a deceptive campaign in a blatant attempt to confuse the voters and allow the corporations to write their own rules,” as said at the conference by Council Member Delia Garza.

During the Tuesday press conference, Mykle Tomlinson, campaign manager for the anti-Prop 1 PAC Our City, Our Safety, Our Choice, issued a press release stating that the new assertions claimed by Ridesharing Works, and coincidentally stated by Moore, are misleading.

Tomlinson said that the December ordinance does not require the city to pay for the fingerprint-based background checks, and that Uber and Lyft would still be able to conduct those background checks through an approved third party or through the city.

“After finding the ‘Vote for Prop 1 to keep Uber and Lyft in Austin’ line was not enough, Uber political consultants have created a new campaign based on false statements about a city takeover of background checks and city taxpayers left holding the bag,” the press release said. “Both claims are false.”