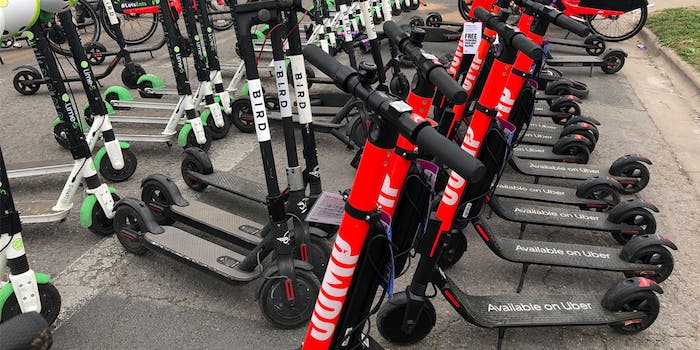 Uber has threatened a lawsuit against Los Angeles in response to the city’s demand that the ride hailing service share real-time location data on its electric scooter users.

The incident began last year when the Los Angeles Department of Transportation (LADOT) ordered all scooter companies to start providing them with such data in an effort to learn how scooter’s affect transit in the city.

Uber, which owns the scooter and bike company Jump, has refused to provide Los Angeles with its scooter location data.

As noted by CNET, an Uber spokesperson has argued that the requirement not only threatens the privacy of its users but violates California’s Electronic Communications Privacy Act.

“Independent privacy experts have clearly and repeatedly asserted that a customer’s geolocation is personally identifiable information, and — consistent with a recent legal opinion by the California legislative counsel — we believe that LADOT’s requirements to share sensitive on-trip data compromises our customers’ expectations of data privacy and security,” the spokesperson said. “Therefore, we had no choice but to pursue a legal challenge, and we sincerely hope to arrive at a solution that allows us to provide reasonable data and work constructively with the City of Los Angeles while protecting the privacy of our riders.”

LADOT finally responded on Tuesday by suspending Uber’s permit, although the Jump scooters will remain operational as talks between the two entities continue.

The city also pushed back on Uber’s assertion, instead claiming that access to user data is necessary “to manage the public right-of-way, ensuring safety and access for everyone.”

“To be effective, the department requires reasonable information about the tens of thousands of shared vehicles operated by transportation technology companies that use our streets for profit,” LADOT said. “While all other permitted scooter and bike companies are complying with our rules, Uber has repeatedly refused.”

While LADOT points to the fact that it is not asking for identifiable information such as a user’s name, age, address, or gender, civil liberties groups warn that determining someone’s identity based on their location data is trivial.

The likelihood that Uber will file a lawsuit seems to grow every day as either side of the argument refuses to back down.