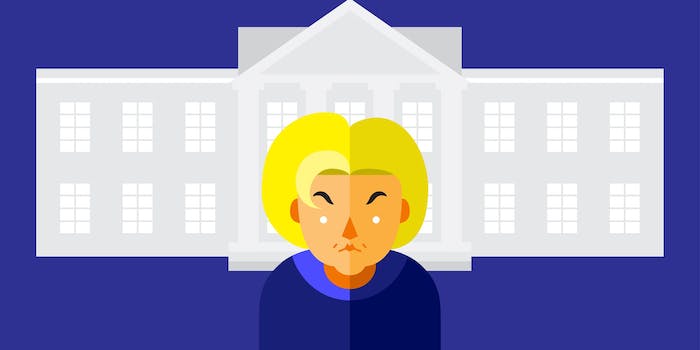 Just when you thought 2016 couldn't get any more ridiculous.

In a story that could only happen in 2016, Politico reports that President-elect Donald Trump cut Twitter—his go-to social network—out of a meeting with major technology company executives because it refused to create a custom #CrookedHillary emoji.

Citing an anonymous source with knowledge of the emoji kerfuffle, the rift between Twitter and the Trump campaign began after Twitter CEO Jack Dorsey personally intervened in a $5 million advertising buy that included emoji of bags of cash changing hands to represent #CrookedHillary, Trump’s disparaging nickname for Democratic nominee Hillary Clinton.

The controversial ad deal was first revealed in a Nov. 18 post published to Medium by Gary Coby, the Trump campaign’s director of digital advertising. Coby writes:

Twitter — or well, Dorsey — restricted us on the most unique part of our deal, the custom hashtag emojis, of which we had two.

It’s an emoji tied to a specific hashtag. When anyone uses that hashtag, the emoji is automatically added at the end.

We planned to launch both of our emojis for the first debate. One was a contrasting emoji for the popular #CrookedHillary. They were going to be featured in our promoted trend for maximum exposure.

Twitter was also the first company to publicly refuse to help Trump build a database of all Muslims in America. On Wednesday, Facebook joined in that refusal.