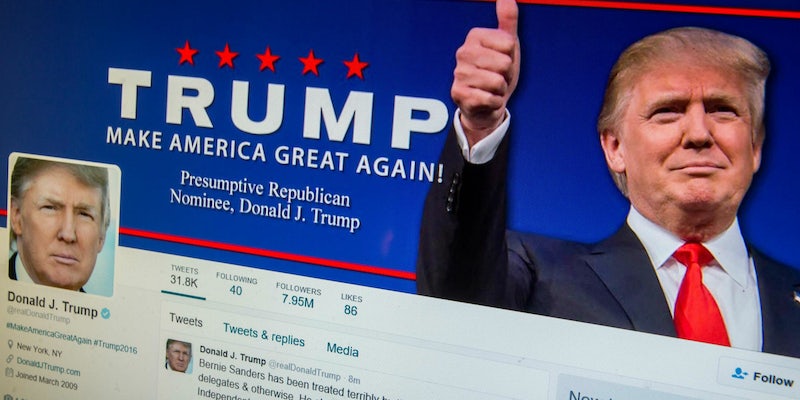 Twitter started enforcing its new guidelines today, and it appears the company included a loophole that will allow Donald Trump to continue posting threatening messages.

Twitter’s new rules were introduced last month and deal with “abuse and hateful conduct” as well as “violence and physical harm.” The two categories found in Twitter’s controversial rules were expanded to punish hate speech included in user’s profiles (not just in the tweets they post) and any user’s affiliation with groups that use or celebrate violence.

The policy on violence already stated that specific threats of violence or the wish for serious physical harm, death, or disease of an individual will result in a permanent suspension. The new rules go after accounts that affiliate themselves with organizations that promote violence against civilians to further their cause.

However, there is one notable exception to the rule: government entities.

Twitter’s new rules don’t apply to “military or government entities” and group that “are currently engaging in (or have engaged in) peaceful resolution,” the company wrote in a blog post today. It added that “groups with representatives elected to public office through democratic elections” are protected.

The exception seemingly gives President Trump the ability to continue to tweet threats to other countries, despite their clear violation of Twitter’s rules. In September, Trump threatened North Korean leader Kim Jong-un, calling him “Little rocket man” and declaring his country “won’t be around much longer.” Twitter justified its decision not to punish Trump by citing a mysterious rule that protects “newsworthy” tweets.

Twitter has been criticized for failing to punish Trump after he made threats and retweeted violent videos. Its latest blunder was failing to explain why violent videos Trump retweeted, one of which appears to show a teenage boy being beaten to death, remained on the site. Since the new rule went into effect, Twitter suspended the two accounts that posted violent videos.