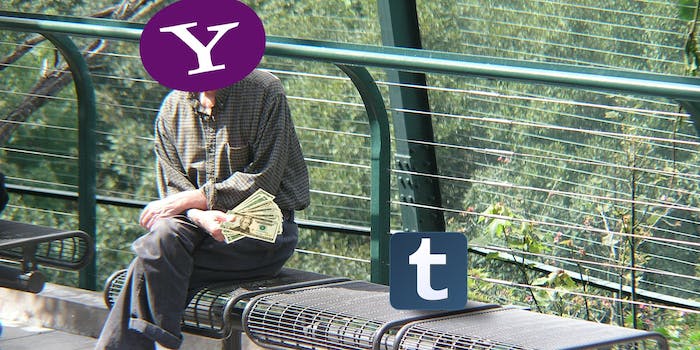 The Internet is buzzing with news that Yahoo is allegedly gearing up for a $1 billion takeover of one of the Web’s more vibrant communities. AllThingsD reports that the arthritic search giant has engaged in “serious” talks to buyout Tumblr in an ongoing attempt to “attract more users from the coveted 18-to-24-years-old age bracket.”

Since launching in 2007, Tumblr has raised more than $120 million in funding, becoming one of the top 25 most visited sites in the U.S. and one of the most watched sites in Silicon Valley—especially by Yahoo CEO Marissa Mayer.

“Since she took over at Yahoo, several sources said that she has met with its top execs, including founder and CEO David Karp,” AllThingsD added. “But sources said that interest has gotten stronger more recently, coming at the same time as Tumblr has been stepping up its efforts to raise a large funding round that could value the New York company at $1 billion.”

While a corporate buyout would make Karp a very rich man and put his company well above the $100 million revenue goal he set for 2013, the move would sap the microblog of its “cool” factor and alienate the artist-driven community, Tumblr user oldandnewfirm wrote.

“Yahoo has a bad track record when it comes to its treatment of the companies it buys—look at the histories of Flickr and Delicious for proof of this—and I wouldn’t be surprised if Yahoo’s intervention actually made this site worse in the long run,” oldandnewfirm added. “And Yahoo would be in a real spot of trouble if that came to pass, because Tumblr is a fairly simple and therefore highly replaceable social network—all it would take is [for one] person to create a viable alternative, and folks would leave here in droves.”

Tumblr is ultimately Yahoo’s antithesis, a way to give it that highly desired youth infusion. Trying to take over Tumblr’s reigns while its still being tamed would be a bit like handing Yahoo 4chan’s notorious /b/ forum and expecting it to turn a profit and keep the community intact. If Yahoo were to buy Tumblr without a clear idea of what its goals are, then it will struggle to understand what to do with it. This is partly due to the fact that Tumblr has yet to figure out what it’s doing. Unlike Flickr, there’s no real function Tumblr provides other than hosting blogs.

Here are five reasons reasons why a Yahoo buyout would be awful for Tumblr:

After purchasing Flickr for $35 million in 2005, Yahoo made a mess of the photo sharing site by stifling innovation, ignoring social media, and most importantly, failing to nurture its community of artists. A former Flickr employee anonymously told Gizmodo in 2012, “That is the reason we bought Flickr—not the community. We didn’t give a shit about that. The theory behind buying Flickr was not to increase social connections, it was to monetize the image index. It was totally not about social communities or social networking. It was certainly nothing to do with the users.” This sort of attitude would not fly. Tumblr’s success, and advertising model, is closely tied to its growing number of users and blogs.

What set Tumblr apart from WordPress and Blogger was its ease of use. With a few clicks, you’re thrust into world of creativity. Under Yahoo, this will likely change. To help promote Flickr and encourage existing Yahoo users to use the site, in 2007 the company required all users to login using a Yahoo ID. This change bogged down the login process and angered new users who didn’t want a Yahoo ID to use the site.

One of Flickr’s backbones is the copyright function that allows users to mark images according sharing permissions (royalty free, commercial only, etc.). While this function has saved artists from having their work stolen, a move like this on Tumblr would cripple its free-wheeling photo sharing culture. While reblogging—a way to feature content from another person’s blog on your own while citing them—has helped act as a sort of copyright system, it has done little to stop people from people taking images and featuring them on their own blog without citation. This has stirred up controversy around the site but has been an important factor in growing its network to more than 107 million blogs.

When Yahoo bought, then tried to sunset Delicious, it did more than just piss off a good chunk of the Internet and ultimately lead to the site’s becoming a shell of itself. It destroyed a huge consolidated part of fandom infrastructure, a well-established system of interlinks, networking, and ranking systems that fandom has never fully gotten back since Yahoo. What fandom learned from that experience is that you’re ultimately only as safe as the third-party platforms you’re using—something that might ultimately come back to bite Yahoo if it tries to put any restrictions on Tumblr fandom. The content filters and copyright restrictions that might work for other Yahoo-owned sites might well be the first sign to fandom that its free-wheeling days on Tumblr are over. While countless fans have only experienced fandom through Tumblr, many other fans have been down this road before, and they know that they have other alternatives: deviantART, Dreamwidth, Pixiv, AO3, Pinboard, even LiveJournal.

Tumblr’s lack of streamlined communication and its weak functionality has always been a stumbling block to parts of fandom; that Tumblr has grown to be virtually synonymous with fandom is as much a byproduct of fandom’s emphasis on community as it is Tumblr’s easy image-handling. If Yahoo neglects, or worse, openly rejects fandom on Tumblr, as it did fandom on Delicious, then the entire Tumblr community could suffer the consequences—along with Yahoo.

While Flickr, Delicious, and GeoCities are the three most recognizable acquisitions Yahoo has made in the past 14 years, it has bought up “failing companies who aren’t going to say no because their other option is death,” Sam Biddle at Valleywag noted. This has resulted in many companies being absorbed into Yahoo or completely shuttered. And if the sunsetting of Delicious is any indication, even large acquisitions aren’t exempt from getting shut down. Furthermore, if Yahoo were to keep Tumblr autonomous, as Facebook did after purchasing Instagram, there’s no telling how many of its 175 employees (and counting) will flee.