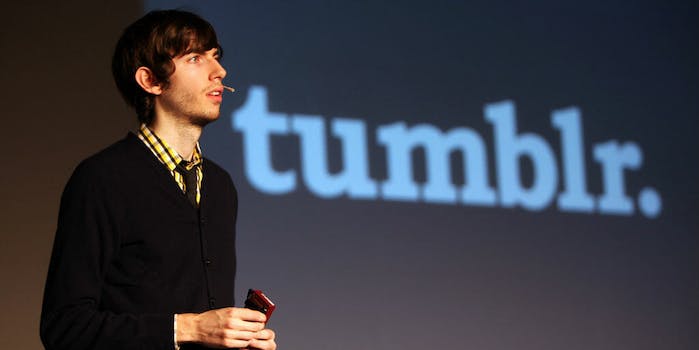 The social site's president and COO will take over in 2018.

Founder David Karp is stepping down from his position as CEO of Tumblr after 11 years.

The decision, which was first announced in an internal memo to employees, comes just months after Verizon acquired Yahoo, Tumblr’s parent company. Yahoo has since merged with AOL to form Oath, Verizon’s digital media division.

A key figure in the blogging site’s rise, Karp vaguely described his decision in a goodbye post on his Tumblr page.

I beg you to understand that my decision comes after months of reflection on my personal ambitions, and at no cost to my hopefulness for Tumblr’s future or the impact, I know it can have. The internet is at a crossroads of which this team can play a fundamental role in shaping. You are in the driver seat, and I am so excited to see where you go.

The blogging site confirmed Karp’s departure and announced that Tumblr president and COO Jeff D’Onofrio will take over in a statement to TechCrunch. It’s not clear if the company will commence a search for a permanent CEO. It’s also unclear why exactly Karp left the company and what his plans are now.

“David Karp will depart Oath by the end of the year,” an Oath spokesperson told TechCrunch. “David founded Tumblr 10 years ago as a space for the world’s creators, and we thank him for his commitment and passion driving the growth of the platform to almost 380 million blogs and over 155 billion posts. Going forward, Jeff D’Onofrio, President and COO of Tumblr, will continue to lead the team.”

Since creating the site in 2007, at the age of 20, Karp has helped transform Tumblr into a place for writers, artists, and everyone in between to share their work. It’s a site that is refreshingly grounded in fandom culture and the creativity of its users, not on the ways it can profit off of them.