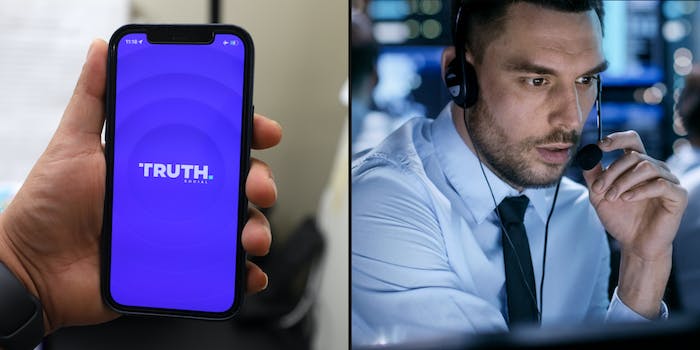 ‘That is not an official CIA account’: Trump’s social media platform is filled with fake government profiles

The Daily Dot found more than a dozen accounts on Truth Social whose handles match those government entities and representatives use on their verified Twitter accounts. These include the Federal Bureau of Investigation (FBI), Central Intelligence Agency (CIA), Justice Department, United States Navy, United States Army, New York City Police Department (NYPD), the White House, the President of the United States, the White House Press Secretary, National Aeronautics and Space Administration (NASA), the Treasury Department, the Department of Homeland Security, the Environmental Protection Agency, and the State Department. In Truth Social’s defense, none of these accounts are verified.

Any of these agencies could’ve signed up for an account—if they had the desire and patience to withstand the signup gauntlet.

The majority of these accounts don’t include a bio and haven’t posted or followed anyone yet. This indicates that they’re likely in the lengthy queue that as of this week had more than 1 million registered users waiting to access their accounts.

A few of the accountholders managed to log in and start using the app.

There are clues that it’s inauthentic. It follows just two accounts: Trump and Donald Trump Jr. NYPDNews recently welcomed Trump Jr. when he finally joined the app. “We are here with you,” it wrote, along with a balloon emoji.

The NYPD confirmed that it doesn’t control this account.

“That is not an official NYPD social media account,” NYPD spokesperson Jessica McRorie told the Daily Dot via email on Friday.

The Navy, Army, FBI, CIA, State Department, and Justice Department also confirmed that their agencies don’t control the Truth Social accounts using their Twitter handles. “This is not an official CIA account,” an agency spokesperson told the Daily Dot via email.

“We’ve contacted the company to have it taken down,” a Navy spokesperson told the Daily Dot via email on Friday. “The Navy does not have a presence on Truth Social currently.”

Further, there aren’t Truth Social accounts for numerous government entities that are on Twitter. As of this writing, no one has claimed the handles used by the U.S. Marine Corps, AmeriCorps, the Agency for Global Media, and others.

Two of the accounts the Daily Dot reviewed use a government handle but aren’t pretending to represent the government. The POTUS account’s bio states, “This is a parody account for all you lying dog-faced pony soldiers to tag.”

The @WhiteHouse account purports to belong to Joshua Whitehouse, a former New Hampshire state representative who briefly worked for the Trump administration. The Daily Dot wasn’t able to reach Whitehouse to confirm whether he runs the account.

Whoever does control @WhiteHouse is a big fan of Rep. Matt Gaetz (R-Fla.). The bio includes Gaetz’s website and the sum total of its activity consists of reposting—”retruthing” in Truth Social parlance—Gaetz twice.

The @NASA account doesn’t appear to be controlled by the U.S. agency tasked with exploring the cosmos, though it appears to at first glance. NASA didn’t respond to messages asking whether it controls the Truth Social account that shares the same handle as its official Twitter.

The Truth Social account describes itself as “NASA Space News including the James Webb Telescope.” Its avatar is the official NASA logo the actual agency also uses on its verified Twitter.

The similarities end there. The account’s bio includes the URL for Space.com, a popular website dedicated to space. The Daily Dot reviewed dozens of its recent posts. All included links to articles on Space.com—none to NASA’s website.

Further examination reveals that the account is actually a bot. Clicking a button labeled “bot” on its bio brings up a notice stating, “This account is an RSS feed aggregating bot, and is not managed by or affiliated with the referenced news outlet.”

“I actually was surprised to see the mention of Space.com on Truth Social as we are currently not involved with that social media service,” Editor Tariq Malik told the Daily Dot via email. Malik added that Space.com “would not be using a NASA handle on any network.”

Some of @NASA’s 113,000 followers on Truth Social nevertheless believe that NASA actually controls the account. “I want to see you land on the moon again,” one replied to a recent post.

It’s not clear who created the account, but someone had to.

Impersonating a government official can have repercussions far more serious than getting booted from Trump’s faltering social media platform.

United States penal code states, “Whoever falsely assumes or pretends to be an officer or employee acting under the authority of the United States or any department, agency or officer thereof, and acts as such, or in such pretended character demands or obtains any money, paper, document, or thing of value, shall be fined under this title or imprisoned not more than three years, or both.”