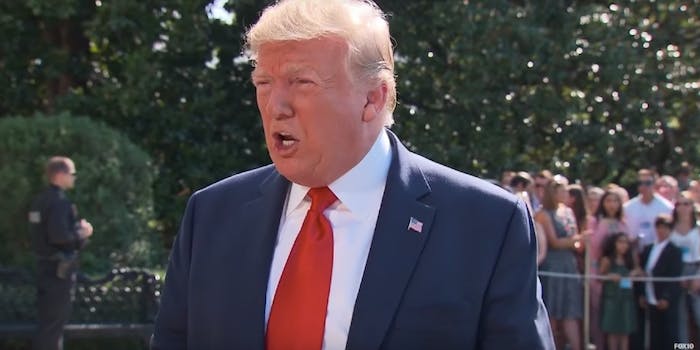 The hashtag #TrumpsBodyCount is trending amid debates about President Donald Trump retweeting a conspiracy theory about the Clintons offing political enemies.

The trending phrase references another hashtag, #ClintonsBodyCount. This hashtag has been used to discuss the conspiracy theory that former President Bill Clinton and Hillary Clinton are responsible for killing people who could harm their political reputation.

On Saturday, Trump breathed life into the conspiracy theory by retweeting a tweet from conservative commentator Terrence K. Williams. In the video attached to the tweet, Williams details how he thinks the Clintons are responsible for the recent death of Jeffrey Epstein, an accused sex trafficker and former financier who was part of an elite circle that included both Trump and Clinton.

Epstein was found dead Saturday in his jail cell, where he was awaiting trial. Officials said Epstein died by suicide, although he was supposed to be on suicide watch after a recent suicide attempt.

Some conspiracy theorists believe that Epstein did not die by suicide. They believe he was instead killed for having incriminating information about powerful people, including Bill Clinton. (Epstein allegedly kept blackmail videos of high-profile elites.)

In response to the conspiracy theories about the Clintons, people started using the hashtag #TrumpsBodyCount to bring up cases where they feel like Trump was responsible for deaths. Some social media users referenced tragedies like migrants dying in detention centers and mass shooting victims.

I think the mass shooting could easily fit into #TrumpsBodyCount

Just want to make sure we include the 3,000 dead American victims of Hurricane Maria in #TrumpsBodyCount.

Where to start? Victims of the mass shootings that he has inspired; The children and adults who have died in ICE custody; Those who can't afford medical treatment because of his attacks on Obamacare. #TrumpsBodyCount

Every single thing listed above has been enabled and okayed by a racist man named Donald Fucking Trump.#TrumpsBodyCount

Others are even using the hashtag to tweet conspiracy theories that Trump is tied to Epstein’s death–not the Clintons.

Trump is pure projection. If Trump accuses someone of something, you can take it to the bank that he's doing that very thing himself. Bigly.

So when Trump retweets some moron blaming the Clintons for Epstein's 'suicide'… It's practically a confession.#TrumpBodyCount #AMJoy

Meanwhile, some are using both hashtags to bring up issues outside of the conspiracy theories.

“The rival #TrumpBodyCount and #ClintonBodyCount tags are almost ludicrously depressing… the US public reduced to picking a corrupt elite ‘team’ to ‘root for’ in the death of a wealthy sex trafficker,” Talia Lavin wrote.