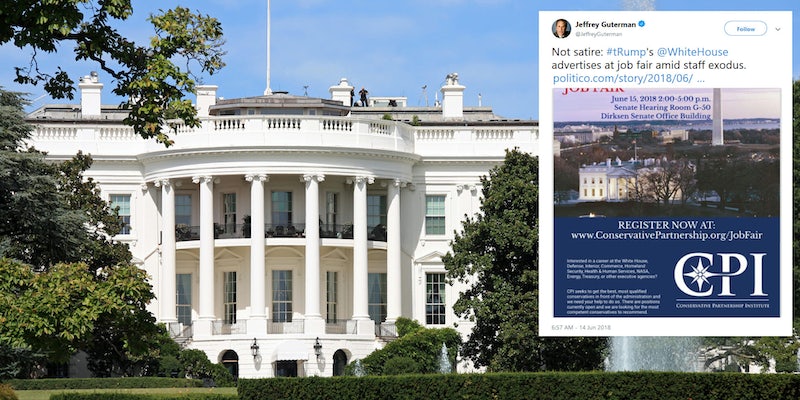 The internet was howling with laughter.

The White House has had a much-publicized high turn over rate since President Donald Trump took office–and now there is a job fair happening to try and find some new talent.

The fair, held on Friday in a Senate hearing room, was advertised to conservatives in Washington, D.C., earlier this week, according to Politico. The “Executive Branch Job Fair” was organized by the Conservative Partnership Institute, an organization that “works to provide these leaders with the tools, tactics, resources, and strategies to help make them successful in advancing conservative policy solutions.”

“There are positions currently open and we are looking for the most competent conservatives to recommend,” it reads.

That does not include other positions like National Security Adviser H.R. McMaster, Secretary of State Rex Tillerson, Secretary of Veterans Affairs David Shulkin, and Secretary of Health and Human Services Tom Price, who have also left.

Despite the numerous exists, Trump insisted earlier this year that “everybody” wants to work in his administration.

“So many people want to come in. I have a choice of anybody,” the president said in March. “I could take any position in the White House and I’ll have a choice of the 10 top people having to do with that position, everybody wants to be there.”

Politico notes that the administration has had trouble finding people to take lower-level jobs after a slew of resignations and firings.

The need for a job fair to fill positions in the Trump administration was the subject of a number of jokes online.

The @WhiteHouse is having a job fair for the executive branch. What a joke.

People want nothing to do with @realDonaldTrump and his disgusting moment in history.

He’ll drag you and the country down with him.

You can read all of Politico‘s report here.