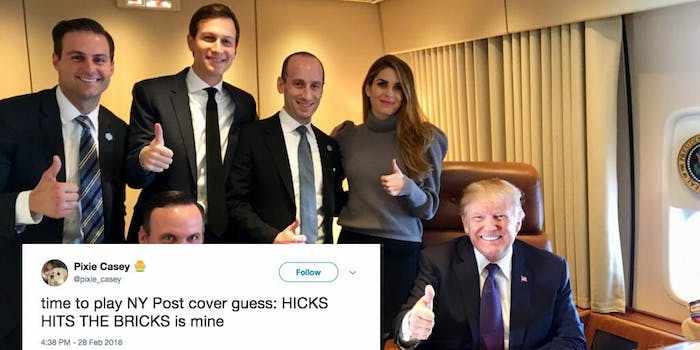 Hope Hicks is out—and the Twitter memes are in

According to the New York Times‘ Maggie Haberman, the resignation had nothing to do with yesterday’s testimony. But tell that to the internet.

Oh I bet she’s been thinking about it for months. https://t.co/0gC55BNzJw

when u did a good collusion pic.twitter.com/qRwtKkJkql

Naturally, because of her high-profile, and because of the constant, unprecedented turnover of this administration, Twitter was all about Hicks’ abrupt resignation.

The White House Communications Director Job is just a few steps away from becoming the Defense Against The Dark Arts job at Hogwarts in terms of turnover. https://t.co/47M5kE7nwl

Only one person has the communicative chops to replace Hope Hicks. Fortunately, he already knows the President pic.twitter.com/vkvQ4dfQFD

congratulations, i assume, to John Barron on his new position as comms director

Might be time for Trump to bring John Barron out of retirement.

(That’s Trump himself, in case you forgot.)

But perhaps some old figures will be returning?

Gorka packs his combat tourniquet, and his emergency backup tourniquet, into his black leather European men's cary-all. Picks up the keys to the Mustang. This is his moment, and he knows it.

And of course, you knew we weren’t getting out of here without this joke.

Hicks had worked with Trump since the beginning of his presidential campaign.