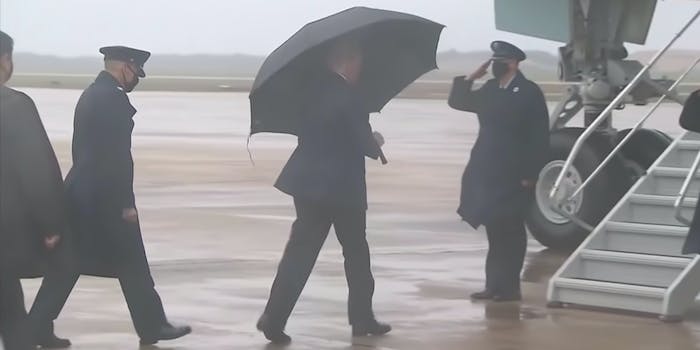 Trump is being criticized for ‘protecting his hair’ but not the humans around him in the photo.

A photo of President Donald Trump is going viral online because critics are saying it sums up him and his presidency to a T.

In the photo, Trump is seen surrounded by Secret Service agents as they walk outside, in the rain. He is the only one not wearing a face mask and is simultaneously protecting only himself from the rain with an umbrella.

The photo was taken by New York Times photographer Doug Mills as Trump headed toward Air Force One, which was bound for his Florida rally on Monday.

Trump reportedly needed oxygen and spent a few days in the hospital after announcing he tested positive for COVID-19 on Oct. 2. As the HuffPost noted, the Centers for Disease Control and Prevention (CDC) advised that patients who have this experience with the coronavirus isolate for up to 20 days. While White House physician Sean Conley said Monday that Trump was “no longer a transmission risk to others” after testing negative for the coronavirus, some remain skeptical and believe the president could still be shedding the virus.

Experts have repeatedly said during the pandemic that in order for face coverings to work against the coronavirus, all parties must be wearing them. Critics railed against Trump for protecting himself with an umbrella but failing to offer protection to those around him by wearing a mask, with many calling him “selfish” and claiming he doesn’t care about anyone but himself.

“The recklessness of Trump’s presidency, summarized in one unbelievable picture,” Matt McDermott tweeted.

At Trump’s Florida rally, where masks were not mandatory, he offered to kiss all the “guys” and “beautiful women” who were in attendance. Trump was also criticized for dancing to the Village People’s “Y.M.C.A.” while more than 215,000 Americans have died from the coronavirus.