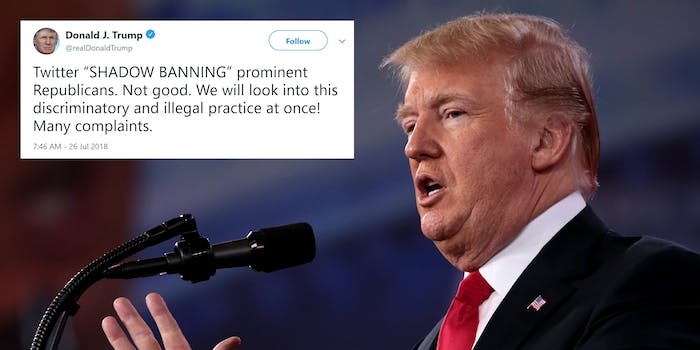 The mob is angry.

President Donald Trump entered this week’s great Twitter censorship debate on Thursday with the bold declaration that Twitter was “SHADOW BANNING” prominent conservatives, keeping them from appearing in search functions.

Like most of Trump’s bold proclamations on the social media network, it is a day behind the news cycle and not entirely accurate. Several media outlets—including the Daily Dot—reported that some prominent right-wing ideologues, as well as members of the House of Representatives, were not appearing in Twitter’s search function.

Twitter told the Daily Dot on Tuesday evening it was working on a fix for the matter. But the news was enough for conservatives to claim that the social network, which they’ve been railing against, was shadowbanning them.

Shadowbanning is the practice of secretly restricting an account or person’s posts on social media to prevent them from being seen by a larger audience. The person ostensibly doesn’t know their account is being suppressed and continues to behave as normal, while their ideas and thoughts are blocked from being seen by the rest of the site’s users.

Whether this practice that conservatives are complaining about explicitly is shadowbanning is a matter of debate. Twitter announced this spring that it was rolling out features to suppress troll-like behavior on the site. That conservatives have noticed their accounts’ visibility being somewhat restricted can be explained by the fact that many prominent conservatives on the site do link to conspiracy-peddling websites and tweet disinformation.

Just last week, Rep. Jim Jordan (R-Ohio) was pushing a deep state conspiracy on Twitter. If that’s considered troll-like behavior by Twitter, it’s not unreasonable that his account’s reach would be limited.

But with Twitter, and the rest of Silicon Valley, conservatives don’t believe it should be the great arbiter of what is true and false—not when its ethos widely aligns with what conservatives believe to be a liberal worldview.

And if these sites do anything to prevent their ideas from being seen by as many people as possible, it’s shadowbanning.

Even if it isn’t.