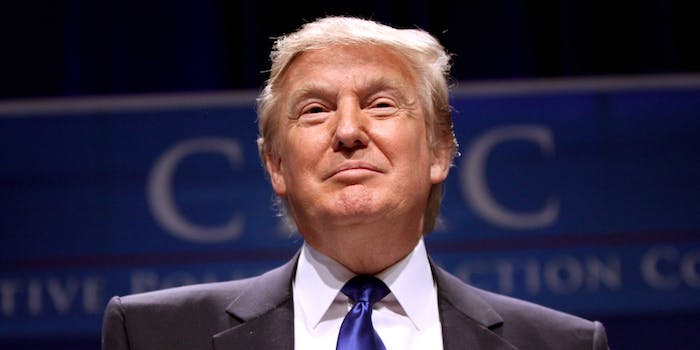 New report adds to rumors of a Trump-branded TV network

Fox News could be getting some competition.

Three weeks ahead of Election Day, the odds a victory by the Republican nominee seem low. A model maintained by FiveThirtyEight that incorporates polls and other relevant data gives the former reality TV star a 15.7 percent chance of winning the keys to the White House, as of the morning of Oct. 17.

A Trump loss would leave the ever-entrepreneurial businessman with a newfound level of political notoriety that could be leveraged into cash. As the controversy swirling around the candidate has harmed his casino and hotel empire, there have been months of widespread speculation that Trump’s post-election play is the creation of a political media empire.

The Financial Times reports that Jared Kusher, Trump’s son-in-law and owner of the New York Observer, has met with senior management of the investment bank LionTree about funding a Trump-branded television network after the election.

Trump has denied assertions that he has any interest in growing a media empire. “I want to win the presidency, and I want to make America great again. It’s very simple. I have no interest in a media company,” Trump told the Washington Post in September. “False rumor.”

Even so, Trump’s inner circle is teeming with the expertise necessary to get a conservative news network off the ground. Steve Bannon, the mastermind behind the increasingly influential conservative news site Breitbart, is the CEO of the Trump campaign. In addition, former Fox News boss Roger Ailes, who was ousted after widespread allegations that he sexual harassed multiple female Fox New employees, joined the Trump campaign to assist with the candidate’s debate preparations.

If Trump launches a TV network, it wouldn’t be his first push into the media world. Trump served as host and executive producer of The Apprentice and later host of Celebrity Apprentice. From the late 1990s to 2009, Trump published Trump Magazine, a luxury lifestyle publication. The magazine was alternatively a gloss publication with a circulation of about 100,000 and a free item distributed in the real estate mogul’s properties.

A first-person account of what it was like to work for the magazine in the mid-2000s recently published in Politico, revealed organizational chaos, rampant sexism, regularly bounced paychecks, and the company canceling the health insurance of an employee recovering from thyroid cancer.