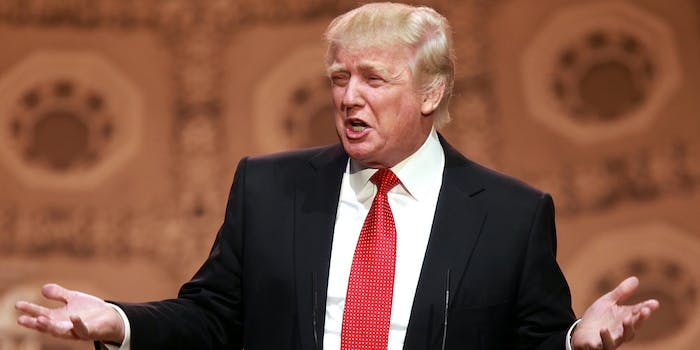 The trip was shrouded in secrecy.

A surprise trip by President Donald Trump to visit the Demilitarized Zone, or DMZ, on the border of North Korea and South Korea was canceled on Tuesday due to bad weather.

The White House has previously broadcasted that Trump would not be visiting the DMZ, a stretch of land between the two countries created after the Korean War, but that could have been a ruse for safety concerns.

ABC News reports White House Press Secretary Sarah Huckabee Sanders scribbled the letters “DMZ” on a piece of paper shortly before the trip was set to take place and showed it to a small group of reporters on Tuesday. Reporters were not allowed to report on the trip until it was over.

Trump’s secret visit would have come amid growing tensions between the United States and North Korea. The president and the country’s leader, Kim Jong-un, have traded barbs in an escalating war of words regarding North Korea’s nuclear ambitions.

Earlier this year, Trump threatened to “totally destroy” North Korea and has repeatedly called Kim “rocket man.” The aggressive rhetoric began in earnest in August when Trump said he would meet threats from North Korea with “fire and fury.”

Late last month, lawmakers said they would introduce a bill that would bar Trump from preemptively striking North Korea by requiring a vote from Congress.

You can read all of ABC News’ report here.