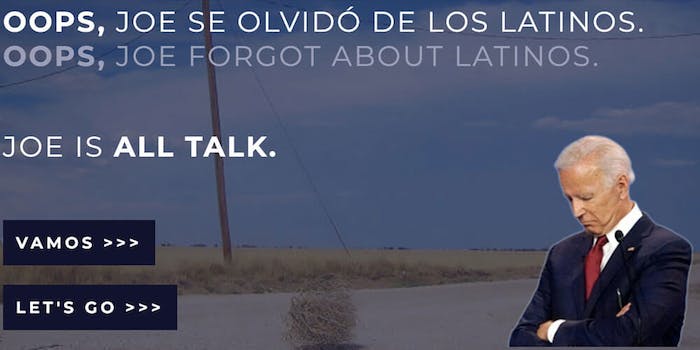 Biden on Wednesday announced the “Todos Con Biden” (Everyone With Biden) campaign in an attempt to secure support from the Latinx community. Only, the former vice president failed to secure the necessary digital real estate needed to promote the plan.

When visiting todosconbiden.com, users aren’t met with information on Biden’s campaign but instead see an anti-Biden message from the Trump campaign.

The message, in both English and Spanish, simply states: “OOPS, JOE FORGOT ABOUT LATINOS.”

The Twitter handle for Todos Con Biden looks much the same, filled with videos of Biden showcasing his seemingly ever-changing views on immigration. The account’s bio also tells followers to “Text VAMOS to 88022.”

Biden’s campaign to gain the Latinx vote doesn’t seem to be going viral either way. A video from Biden’s official YouTube account announcing Todos Con Biden has less than 1,800 views at the time of publication.

The incident is yet another blow to Biden’s gaffe-filled campaign, which seems to struggle with how to operate in the digital-era.

Biden made a similar mistake in late July at the end of one of the Democratic debates. While attempting to give out his web address, Biden instead gave out a phone number.

The web address biden30330.com was quickly obtained by a self-described Gen Z candidate named “Josh” who isn’t even eligible to run yet.