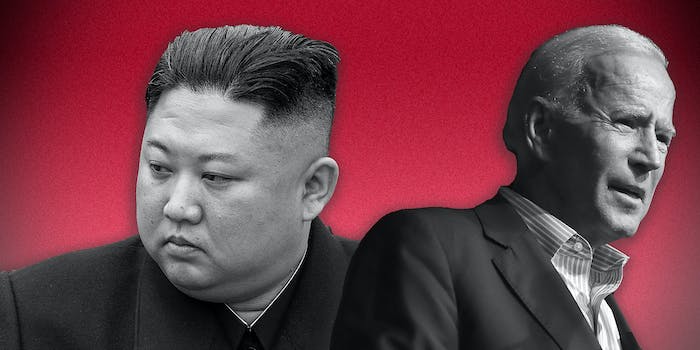 'Biden’s been trying to contact Kim Jong-un for over a month but he’ll only take Trump’s call.'

Supporters of former President Donald Trump are celebrating online over claims that North Korea has declined to talk with the administration of President Joe Biden.

The U.S. government, as reported by the BBC on Monday, has allegedly “been trying for weeks to make diplomatic contact with North Korea” to no avail.

The issue became a trending topic on Twitter Tuesday and was widely cited by Trump supporters as proof of the twice-impeached president’s profound leadership abilities.

“Biden’s been trying to contact Kim Jong-un for over a month but he’ll only take Trump’s call,” @jason_meister said.

Trump supporters have long been convinced that no other president could have achieved what Trump did through his meetings with North Korean dictator Kim Jong-un.

In reality, previous sitting president’s never sat down with Kim not because they couldn’t, but because the U.S. government did not want to legitimize the rogue regime unless it was willing to first take concrete steps towards denuclearization.

Not only that, Trump’s meetings turned out to be little more than public relations stunts. North Korea’s nuclear weapons program has continued to advance unabated despite Trump naively believing that falling “in love” with Kim would lead to denuclearization.

Even the claim often repeated by Trump supporters that North Korea ceased ballistic missile testing in response to demands from the former president is false. North Korea repeatedly defied Trump’s demands and later ended testing only after claiming to have achieved its goal of developing an intercontinental ballistic missile (ICBM) capable of reaching the U.S. mainland.

But the facts haven’t stopped Trump supporters from gloating this week and choosing to applaud the dictator’s decision not to engage in dialogue with their own country.

“North Korea is not responding to the Biden administration,” @FogCityMidge said. “For the safety of the entire world let’s hope it remains this way. Biden can only screw it up.”

But even though experts argued that Trump’s approach to North Korea was largely counterproductive, those same experts are now criticizing Biden as well.

Dr. Jeffrey Lewis, a professor at the Middlebury Institute of International Studies at Monterey, noted on Twitter that the Biden administration is already making many of the same mistakes that Trump did.

“The North Koreans really hate it when the U.S. deliberately misconstrues North Korea’s call for the denuclearization of the Korean Peninsula as a unilateral offer to disarm,” Lewis tweeted. “And that’s what Biden’s people are doing now. It’s no surprise the North Koreans won’t talk to them.”

Ironically, given that the current administration is making the same mistake as the previous one did, North Korea’s refusal to talk may be largely rooted in its understanding that it can’t manipulate Biden the same way it did Trump.

The North Korean government did ultimately acknowledge the new administration this week when Kim Yo Jong, the sister of North Korea’s leader, released a series of threatening remarks.

“If it wants to sleep in peace for (the) coming four years, it had better refrain from causing a stink at its first step,” she said.