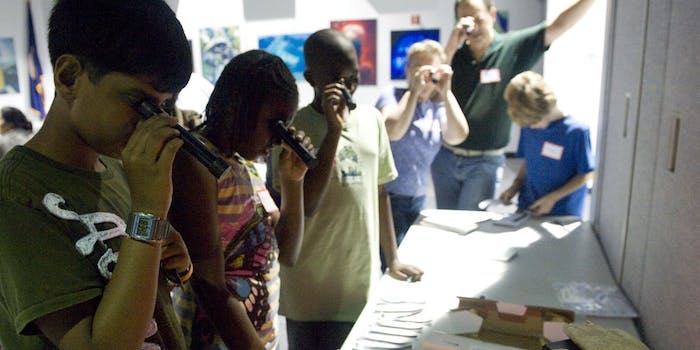 The aim is to prepare students for computer science jobs.

Silicon Valley tech companies are teaming up with the Trump administration on a new initiative to push science, technology, engineering, and mathematics in our schools. The new STEM initiative, which Trump will be signing as a memorandum today, will ask the Department of Education to allocate $200 million of its grant funds toward coding and STEM education.

The impetus for this new initiative is train the workers of tomorrow for the growing demand of computer-science jobs. It should also help improve the woeful state of STEM education in this country. According data from the American Institute of Physics, less than 40 percent of graduating high school seniors have taken a physics course. (The White House reports that only 60 percent of high schools even offer physics as a course.) As for computer science, less than half of U.S. high schools offer coding courses.

“Our country is facing a challenge that it hasn’t had to address in two generations: reworking the education system to keep pace with advancing technology,” Microsoft president Brad Smith said in a statement today. “In the 1950s, the race to space drove schools to start teaching physics. Today, it’s all about computer science.”

On Tuesday, Trump’s daughter Ivanka will head to Detroit to announce private sector commitments to this program. Representatives from Amazon, Facebook, Google, GM, and Quicken Loans will be in attendance, among others.

This STEM education effort comes at an interesting time. Many tech leaders recently criticized Trump for his move to end DACA and decision to ban transgender individuals from serving in the military. Earlier this year, many of these same executives served on the Trump administration’s technology council. While Trump dissolved two related councils (members resigned following Trump’s response to the Charlottesville, Virginia, incident), his administration still hopes to work with industry tech leaders to modernize our government, and now, help bring our education system into the 21st century, too.