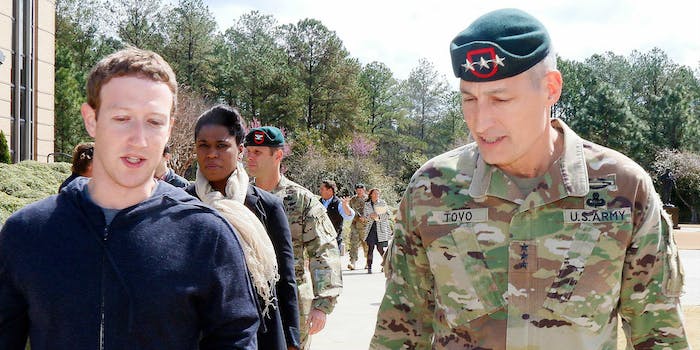 Some of the biggest names in tech have once again taken to social media to denounce one of Donald Trump’s policies. CEOs of Apple, Google, and Facebook spoke out against the president’s decision to ban transgender people from serving in the military.

Mark Zuckerberg kept things concise in a response he posted to Facebook Thursday.

Everyone should be able to serve their country — no matter who they are.

Apple CEO Tim Cook said we are “indebted” to everyone who serves in the military.

We are indebted to all who serve. Discrimination against anyone holds everyone back. #LetThemServe

And Google CEO Sundar Pichai tweeted his criticism of the decision, also including the #LetThemServe hashtag.

I am grateful to the transgender members of the military for their service.  # LetThemServe.

This isn’t the first time fierce tech rivals have come together against one of Trump’s policies. Execs from top companies responded similarly when Trump announced a travel ban on seven Muslim-majority nations from entering the United States. Similarly, after Trump’s decision to exit the Paris Climate Accord, SpaceX and Tesla CEO Elon Musk elected to leave the presidential advisory council.