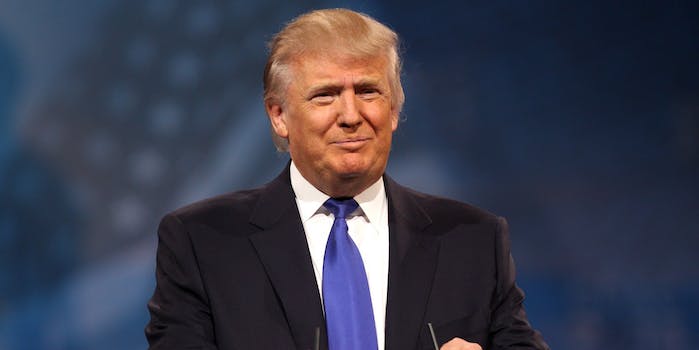 Donald Trump calls for Bernie Sanders to back him, dubs Hillary Clinton a ‘world-class liar’

Trump also laid out his plan for his first 100 days in office, including efforts to increase jobs and fix the problems of “crumbling roads and bridges, dilapidated airports, [and] the factories moving overseas to Mexico,” among other initiatives.

“That’s why we’re asking Bernie Sanders’ voters to join our movement: so together we can fix the system for all Americans,” Trump said. “Importantly, this includes fixing all of our many disastrous trade deals.”

While Sanders himself has proven he’s not a supporter of Trump—including a recent meeting with President Barack Obama where he agreed to work with Clinton to defeat Trump in the general election—a recent Bloomberg Politics national poll of likely voters in November’s election found that 22 percent of Sanders’ supporters say they’ll vote for Trump, while 18 percent favor Libertarian candidate Gary Johnson.

In a later interview with C-SPAN, Sanders conceded that he will most likely not win the Democratic presidential nomination.

“It doesn’t appear that I’m going to be the nominee, so I’m not going to determine the scope of the convention,” Sanders told C-SPAN, in remarks transcribed by the Washington Post.  While Sanders hasn’t suspended his campaign, he says his team is “negotiating almost every day with the Clinton people” so Clinton can “stake out the strongest positions she can” on issues like campaign finance reform, health care, higher education, the economy, and the minimum wage.

Sanders also doesn’t seem to believe that Trump—whom he calls a “bigot”—could win his voters.

“I suspect he ain’t gonna get too many of those people,” Sanders says.

During his speech, Trump called Clinton a “world-class liar” and said that she “has perfected the politics of personal profit and even theft.” He also said that Clinton “has spent her entire life making money for special interests” and “does not have the judgment” to be president.

Trump continued: “Hillary Clinton may be the most corrupt person ever to seek the presidency of the United States.”

Trump’s claim that Clinton is a “liar” singles out her email scandal and “phony landing in Bosnia,” which, as the New York Times points out, is a reference to comments Clinton made in her 2008 campaign about an earlier trip to Bosnia as first lady where Clinton said she “had to land a certain way and move quickly [in Bosnia] because of the threat of sniper fire.” Later footage, however, showed Clinton and her daughter, Chelsea, walking through a scene that posed no threat.

Trump continued to attack both Clinton and the Obama administration for their “bad judgment” in the Middle East, including the departure of U.S. troops in Iraq—which Trump believes handed the U.S. over to the Islamic State—and for Clinton’s desire to “rush us off to war in Libya.”

While Trump says he was against the war in Iraq and “among the earliest to criticize the rush to war,” records show that both Clinton and Trump wanted to go to war in Iraq. Clinton later apologized for her vote in support of the Iraq War, but Trump continues to deny that he wanted the war at all. Reports also confirm that while Trump says he never discussed supporting U.S. troops in Libya, he pushed for Libya intervention in 2011.

“I can’t believe what our country is doing,” Trump said at the time, according to BuzzFeed. “Gaddafi in Libya is killing thousands of people, nobody knows how bad it is, and we’re sitting around we have soldiers all have the Middle East, and we’re not bringing them in to stop this horrible carnage and that’s what it is: It’s a carnage.”

The Trump campaign did not immediately respond to our request for comment.