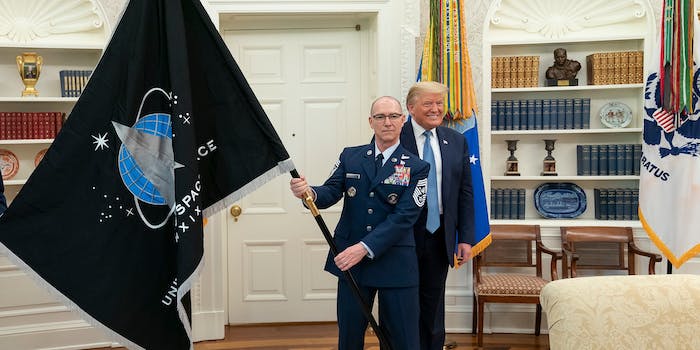 Did Trump create Space Force because he learned about aliens?

Even skeptics think Trump may have been inspired by possible existence of aliens.

On Monday, news of the possible existence of alien life traveled the globe faster than the speed of light.

Former Israeli space security chief Haim Eshed, who led that nation’s space security program for 30 years, told Yediot Aharonot that an extraterrestrial Galactic Federation has been in contact with the United States and Israel for years. Eshed, 87, added that the aliens haven’t revealed themselves because humans aren’t ready, the Jerusalem Post reports.

The stunning report, arguably the most credible testimony that aliens exist, which has inspired countless rumors over the years, immediately sparked speculation that learning of the existence of the Galactic Federation inspired President Donald Trump to create the Space Force last December.

“I’ve said it before and I’ll say it again: the biggest proof of alien life, by far, is that Donald Trump got his first intelligence briefing and was immediately like ‘uh…SPACE FORCE,'” tweeted Jesse Case.

Trump announced that he might create a Space Force in 2018, a year after taking office. “My new national strategy for space recognizes that space is a war-fighting domain, just like the land, air and sea,” he said at the time. “We may even have a ‘Space Force’—develop another one—Space Force.” His announcement echoed military leaders’ warning a year prior that the U.S. needed to prepare for war in space, Gizmodo reports.

Eshed’s account included even more extraordinary details. He said that the U.S. has agreements with the aliens, including an underground base on Mars currently staffed by human and extraterrestrials. He also implied that the aliens are benevolent, saying they’re compelled to study the fabric of the universe.

He also claims that Trump was on the precipice of disclosing their existence, but the Galactic Federation convinced him to keep quiet out of fears that it would create mass hysteria. They supposedly want to wait for the great reveal until humans “evolve and reach a stage where we will … understand what space and spaceships are,” Yediot Aharonot reported.

Eshed reportedly explained that he was coming forward now because academics are more open to the idea of aliens than ever and, at his age and stage in his career, he has nothing to lose.

“If I had come up with what I’m saying today five years ago, I would have been hospitalized,” he said. “…Today, they’re already talking differently. I have nothing to lose. I’ve received my degrees and awards; I am respected in universities abroad, where the trend is also changing.”

Eshed also recently wrote a book in which he includes more details about the alleged aliens, according to the Jerusalem Post.

Even people who didn’t necessarily believe Eshed thought that hearing it could’ve inspired Trump to create the sixth branch of the military.

News of the Galactic Federation coincidentally corresponded with a report that Trump has secretly decided to rename two military bases after the Space Force, as well as aviation pioneer Chuck Yeager.

Neither the U.S. nor Israeli government has officially remarked on Eshed’s claims about aliens.