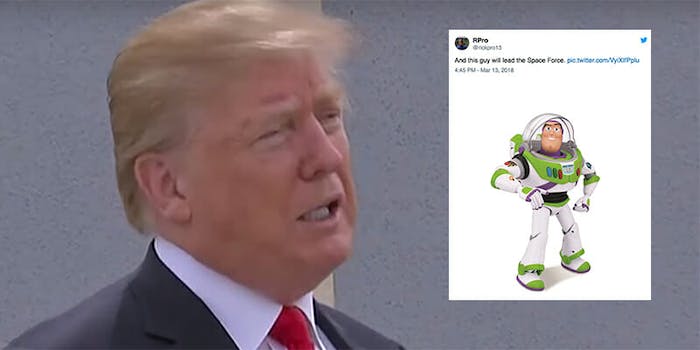 Trump wants the U.S. military to have a ‘space force’

So he can fight wars in space.

In a speech to personnel at Marine Corps Air Station Miramar in San Diego on Tuesday, Trump suggested a new military branch that would, presumably, go to infinity and beyond.

He failed to mention the Coast Guard or the Marines.

“I said ‘maybe we need a new force. We’ll call it the space force.’ Not really serious,” he said, reportedly to mixed laughter. “And then I said ‘What a great idea. Maybe we’ll have to do that.’ That could happen.”

According to Gizmodo, despite Trump taking full credit for the suggestion, military leaders last year said space is the next war frontier (as they were requesting funding).

And this guy will lead the Space Force. pic.twitter.com/VyiXIfPplu