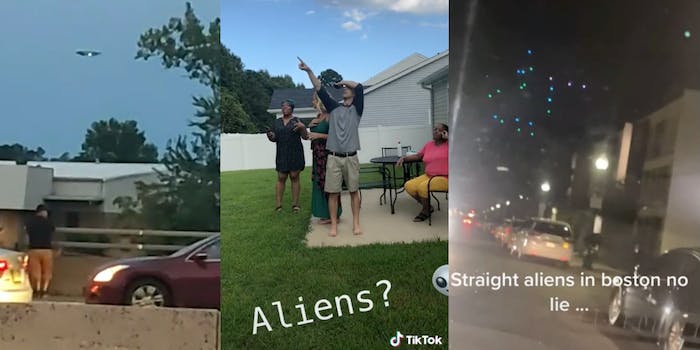 'I cannot believe I’m seeing this with MY OWN eyes.'

There has been an apparent recent surge in TikTok videos featuring “UFO sightings,” so much so that users are even making videos about the videos’ prevalence on the platform.

User @withinthewild’s video, which seemed to show up on users’ For You pages Tuesday, features @withinthewild and their companions standing in the backyard of a home, pointing up at mysterious “sparkly diamonds” in the sky. The user chalked up the “UFO sighting” to it being the year 2020.

At least two videos feature UFO sightings in Boston, one showing a slew of moving multicolored lights. “One of those UFOs landed next to my job … Boston about to be hit by something big. Please be careful,” a user cautioned in their video.

In a different video filmed in an unidentified location, a TikToker shouts “What is that!” several times while an object with three lights hovers above them.

In another video, a “UFO” is seen hovering above a highway in New Jersey. The sighting seemingly brought cars to a halt on the side of the road. “Yo, look at that,” the TikToker says, as they and other spectators record on their cellphones.

The sightings in New Jersey, however, were not of a UFO but of a Goodyear Blimp, according to multiple reports. The blimp was reportedly flown over the MetLife Stadium, where the game between the Pittsburg Steelers and New York Giants was taking place.

The videos’ pervasiveness in users’ For You pages on Tuesday led many to think there was an “alien invasion” across the country overnight. Others are making their own compilation videos featuring all of the sightings. Users even carried their speculation over to Twitter. “Okay TikTok is flooded with recent UFO videos OVERNIGHT. I’m not saying anything, but watch for aliens,” one Twitter user wrote.

All of the videos were posted in September, some as recent as Monday. Either more users are posting their UFO sighting videos, or more of these types of videos are making their way to the platform’s For You page, where the content would be viewed by the masses and make it seem as if there has been a recent surge in UFO sightings. The Daily Dot has reached out to TikTok.