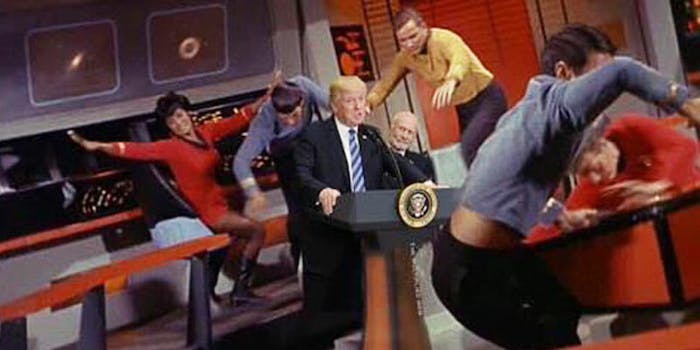 Trump’s proposed ‘space force’ has inspired a galaxy of memes

The only good to come from Space Force so far.

Since Trump announced his plans for a “Space Force” as a sixth branch of military earlier this week, journalists and pundits have been scrambling to come up with takes. Some are praising the idea as a possible way to protect the planet from future asteroids—just like in that movie!—or reminding us that Trump isn’t even the first person to present this idea.

Others are (justifiably) envisioning a potential bureaucratic nightmare, hurtling the United States even further into debt. And that’s if the damn thing ever even comes to fruition in the first place since no one—Trump and his most vocal supporters included—seem to know exactly what such an endeavor would entail, as evidenced by his appearance at a rally in Minnesota Wednesday night.

.@POTUS: "We have the Air Force, now we're going to have the 'space force.'" https://t.co/ecUNWx8Dyl pic.twitter.com/8pLckUCdP2

“But we have the Air Force, now we’re going to have the Space Force, because it’s a whole [makes vague half-circular motion with his arm] … We need it!”

Cooooool. Cool, cool, cool. Thanks for clearing that up, Prez.

At any rate, if there is any good to come from Trump’s announcement, it’s that his Space Force has inspired a galaxy’s worth of memes and jokes on Twitter.

On my way to join the Space Force pic.twitter.com/VNv84e1GZf

Space Force: Come for the Adventure, Stay for the Uniforms#SpaceForceRecruitmentSlogans pic.twitter.com/RW5mlZqdHw

And of course, there were plenty of obligatory pop culture references including Star Trek, Star Wars, and others.

We already have a #SpaceForce. And the fictional one is more celebrating of diversity than this administration could ever be. #Resist #LiveLongAndProsper pic.twitter.com/EDJdI6y1hF

This is all I see when I read about #spaceforce pic.twitter.com/unSXPGuS0w

What a time to be alive! #SpaceForce pic.twitter.com/qHhu5tAIV6

One person referenced Slobodan Praljak, the Bosnian Croat general who committed suicide in the courtroom where he was being charged with war crimes, to convey disappointment at probably not being able to join Space Force.

When you realize you’re too old to enlist in space force pic.twitter.com/zn1AEaEuJC

All we know is that this is certainly not the last we’ll hear of Space Force, nor will it likely be the dumbest thing to come from the Trump administration.